Governments’ scandal with foreign workers and its consequences 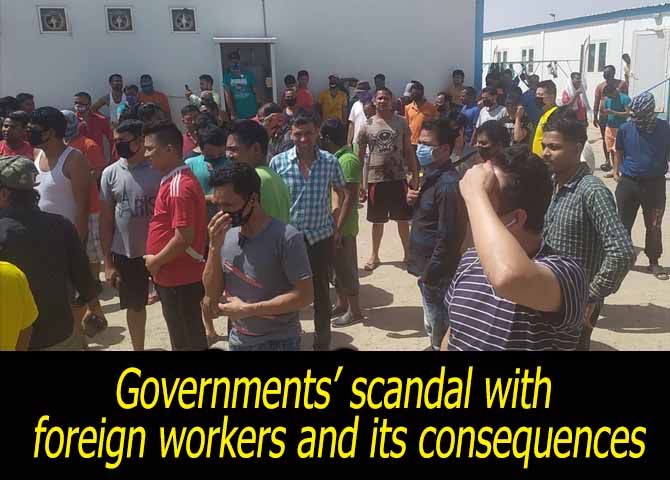 (Lanka-e-News -25.July.2020, 11.30PM) There is a saying that the most dangerous phenomenal in the world is violent ignorance and ignorant conscience. This story is recalled as a prelude for today’s story. About 100,000 Sri Lankans workers in the Middle East are now in dire straits. More than 50 people have been died and no information about another hundred. Some have committed suicide. A group of women released a video yesterday said they had fallen into prostitution due to helplessness. But the Sri Lankan government is silent. The government is playing with lives of the people stranded in the gulf.

When other countries took their workers, Sri Lanka left them alone Countries such as India, Philippines, Pakistan, and Bangladesh, from the very beginning, operated daily flights to bring in their foreign workers at a time the corona threat in those countries were worse than in Sri Lanka.

The Sri Lankan government is not only playing with the lives of foreign workers but also throwing sand to their eyes. The infamous Gnanasara went to the Kuwaiti embassy with a group of monks yesterday. He went to the Kuwaiti embassy against the backdrop of the fact that Kuwait had fulfilled their duties on behalf of the Sri Lankan workers by providing a number of other special reliefs.

The relief provided by the Government of Kuwait is as follows.

It was the government which abandoned the foreign workers not the Kuwait embassy..

Gulf workers became stranded due to the closure of the airport. It is the fundamental right of citizens to come to his motherland. But the country's rulers viciously usurped that right and closed the airport. Gnanasara should go the foreign ministry not to the Kuwait embassy. Despite all the negligence on the part of the government, Gnanasara does not say a word about it. However there is no benefit for the foreign workers when morons like Gnanasara going to the Kuwaiti embassy who insulted the Quran and who lacks approval of a civilized society. If there is an essential to discuss with the embassy the right person should go.

Brutal conspiracy of the Rajapaksa government..

Gnanasara’s speech opposite the Kuwaiti embassy disclosed he is washing the dirty laundry of the government. When the foreign employment bureau accepted there were 40 deaths in the gulf, Gnanasara said only 15 to 16 deaths. At one point of his speech the cat jumped out from his pouch. He said “the problem is same if the workers stay in Kuwait or come here”. Gnanasara went to the Kuwaiti embassy to carry out a government plot. He went to the Kuwait embassy to socialize and spread the rumor that the Rajapakse government has successfully rescued the people from Wuhan but due to the strict laws of the gulf the rescue operation of the workers has been has been hampered. He is trying to conspire the government’s inability on the gulf countries. Gnanasara went to the embassy to stage that drama.

The unintelligent conscience of the Pohottuwa politicians and the social media slaves..

During the president election it was the same slavery group who said they were discontented when the war heroes protesting against the government opposite the fort railway station provided with all facilities. Both national security and the national economy are intertwined with each other. Foreign workers are the backbone of the country’s national economy. Foreign workers are the guardians of the whole nation. At present the Rataviruwan is facing a huge humanitarian tragedy. The Rajapaksa government has no accountability for this. Cronies are glorifying the Wuhan operation which rescued the children of corrupt politicians and covering up the Middle East tragedy. People should tap their conscience and check.

This is not an isolated incident; this would affect you as well..

It is no secret that the short-sighted so-called patriotic regime is covering up the Middle East tragedy as an isolated incident. But this is a paradox that the entire country will have to pay compensation for. However at present Maldives has been opened for tourists. Dubai too is going to open in few days but Sri Lanka cannot do that because by keeping the foreign workers in the brink of death and opening the country for the tourists. Delaying the entrance of the tourists has become a serious challenge for the government. At least it takes 500 flights to bring the foreign workers back and it takes a lot of time. Facts are such that opening the country for tourists is not easy. There are nearly half a million people who depend on the tourism industry. The fate of the man who sells thembili and to the owner of the star hotel is the same.

Do not get fooled by devious guards..

The Rajapaksa government bulldozed King Bhuvanekabahu's edifice. It is a well known fact that a conspiracy being hatched to cover up the incident. This is the true nature of the Rajapaksas. It should be understood that the Rajapaksas, who have adopted a false as their religion, showing a fake face to the foreign workers. Gnanasara is a government contractor. It is true that Ven. Jamburewela Chandraratana too is talking about workers in the Middle East, but knowingly or unknowingly he also acts as a rubber stamp of the government. What would have happened if there had been a UNP government by now? Hiru and Derana will broadcast 'Breaking News' and broadcast stories of tears in the Middle East. Rajapaksa Buddhist monks will fast in front of the Foreign Ministry. Weerawansa and Gammanpila would open their gaping mouths. The Rajapaksas will feed thembili water on the fasting people.

Instead of being silent spectators..

Therefore, it must be understood that the Rajapaksa government is brutally ignoring the foreign workers. Instead of remaining silent spectators of this corrupt rule, alternative actions must be taken.

1.      Socialize your grievances as much as possible. Call popular social media networks and ask them for help
2.      Talk to well-known journalists and ask them to speak out about the Middle East tragedy.
3.      Do not allow contractors like Gnanasara to hijack the Middle East tragedy. Talk to Buddhist, Hindu, Catholic and Islamic clerics and make them aware.
4.       Inform relatives in Sri Lanka about government frauds
5.      Talk to Sri Lankan lawyers and take your fundamental rights to courts, in public interpretation cases.

The silence of good people is dangerous..

Foreign workers of our country have become helpless due to the government's brutal disregard. Countries that are poorer than we are and suffered more from the plague have taken steps to bring their workers. Workers in the Middle East are the life and blood of our country. It is a heinous crime to close the airport where they cannot return to the motherland after doing such a great service to the country. Anyone who thinks that foreign workers can be protected from corona by confining them to the countries where they work should have their brain tested. Lanka e News urges politicians, lawyers, clergy and social activists to raise their voices on the tragedy of the Middle East which being covered by the government.