Should we rally for the killer president’s demand or to chase the Rajapaksas? Lets learn from the Mahara prison massacre 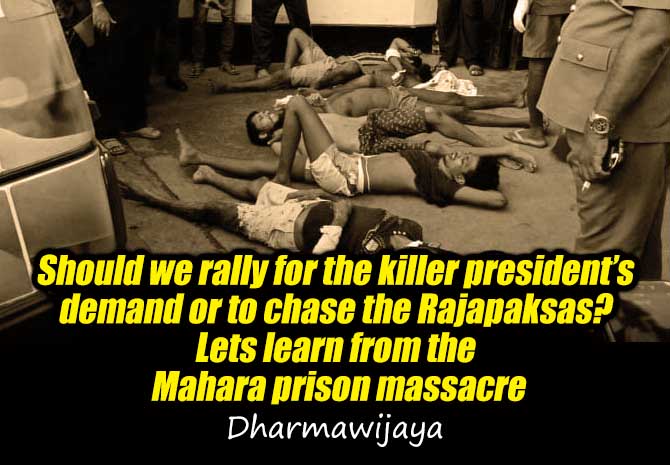 (Lanka-e-News -13.Dec.2020, 5.15PM) President Gotabaya Rajapaksa has called on the people to rally against corruption and fraud. He is the only powerful head of state in the world today. He came to power on the pretext of eradicating corruption, fraud and theft and moving the country towards prosperity. It is not ridiculous but extremely dangerous for such a person to ask tad he people to rally for it now.

It is very clear that the President has not made his vision of prosperity (සෞභාග්‍යයේ දැක්ම) a reality over the past year. The latter has proved killing of unarmed men in government custody, Summoning death sentenced criminals to the Parliament, giving presidential pardon for mass murderers, acquitting offenders robbed public money, Imprisonment of law abiding police officers, Environmental destruction, Inability to control prices of essential foods, banning the import of turmeric and importing coconuts, Measuring coconut, throwing pots to the rivers, feeding honey to suppress Corona and many other types of polygamous activities and providing opportunities for close friends to make money by ripping the public.

Gotabaya initially was brazed about defeating Corona virus like he ended the thirty year war later said he could have ended Corona if it was a war but he cannot do because it is a virus. All his dramas such as visiting whole sale markets Colombo became a flop in a year when the prices of all essential food and other consumer goods became doubled. The ex military chiefs he appointed to control various state institutions are also playing insane. As a powerful leader, he has done nothing for the betterment of the people of Sri Lanka instead wasting of public money, corruption; fraud, theft and pompousness are allowed to escalate.

Gunshots were fired at sick patients who were screaming for water...

The most recent incident reported was the shooting of inmates to death at the Mahara Prison. The interim report of the five-member committee appointed to look into the incident clearly states that the attack was carried out on a group of inmates suffering from fever who were screaming for water. According to the interim report, they had come to the main gate of the prison asking for water and had sought the help of the guards. This was stated in several national newspapers on the 9th. Derana and Hiru showed live footage that the security forces including the police did not allow the five fire brigades that arrived at the scene at around 7 pm on the day of the incident to extinguish the fire. It is questionable why the relevant committee did not observe the revelation. Maybe they have forgotten. However, Gotabaya is allergic for water.

Meanwhile, the statement made by the Minister of Prisons in Parliament that none of the inmates were shot dead became a hoax when the Attorney General reported that the detainees were killed by gunfire. The Attorney General's Department stated the facts whe the CID submitted a report on the murder of Mahara prison inmates to the Welisara Magistrate's Court on the 8th of this month.

The Attorney General's Coordinating Officer said in court that the 11 inmates in Mahara had died due to a shooting and the inmates violent behaved is not due to consuming drugs given to the mentally ill.

The summarized report contains the following..

"When the prisoners became aware of this the detainees were discontented and become  fear. There was evidence that a number of prisoners were suffering from fever in wards including the L ward. They were given Panadol without a check-up at the prison hospital. ‘More than 1000 detainees have rallied protesting demanding the followings"

"To send the remand prisoners home who are already on bail without further delay. To subject all prisoners for PCR test for Kovid-19"

To remove all Kovid-19 patients from Mahara prison

Provide suitable food that can be eaten"

(There were no indication in the report about a reverse pill but reported that diazepam is said to have been taken. There is no indication about 21,000 stock of pills of any drug)

The suppression report contains the following..

"Tear gas was thrown at the detainees"

"Later live ammunition were fired at the inmates to quell the unrest. In the first instance, one inmate was shot in the shoulder and the
group has dispersed.''

''On the evening of the 30th, the detainees came near the folding gate and rioted violently. Detainees had shouted asking for water. At the same time, officers opened fire to control the mob. Several people have been shot as a result"

"Only after a post-mortem can determine whether gun shots fired from a close range at the detainees. Until now a post-mortem has not yet done"

Firearms has been used only by the prison officials

Although there were no reports of Kovid-19 disease among Mahara prison inmates prior to the incident, on the day of the incident, inmates have come to know a large number of Kovid-19 patients were in remand custody. Due to the heavy congestion in the remand prison

It is observed the spread of the flu in the remand prison and the consequent risk to their lives has made the prisoners boisterous and started to protest demanding safety.

It was observed the protest has intensified in the hope of getting a quick solution from the prison officials.

It was further observed that various groups who were accused of being involved in various crimes among the remand suspects at the time had taken advantage of this opportunity and had grouped up on each other to achieve their personal vendetta It was finally observed that inmates have set fire to prison property and documents, causing extensive damage to the institution by breaking buildings.

The committee observed that the firearms were in the possession of the prison officers and they were the only ones had used firearms.

The clash has started on the evening of the 29th and lasted till night and until 30th evening.

For what we should rally?

We used statements from the report submitted to the court on the Mahara massacre above to reflect on President Gotabaya's response to those who oppose fraud, corruption and theft.

That is why we say that his request is a very dangerous one. According to Gotabhaya, if you go to rally against corruption, fraud, theft and injustice, you will definitely be shot. Later, Wimal Pachawansa, the Panchayudha of the Nation, would say that you have taken reverse drugs. The mass murderer Ratwatte will say that no one was shot dead. That is what the Mahara massacre proves.

What else can you expect from an American-Sri Lankan dual citizen who knows nothing but human blood, left the military with a brain injury and does not know what to do tomorrow?

Therefore, we must line up not to follow the false demands of the rulers but to completely defeat Rajapakse's promises, including that of dictator Gotabaya.