Port city bill passed by a majority of 91 votes, betraying the heart of the motherland to the Chinese imperialists ..! Three armed forces deployed across the country..! 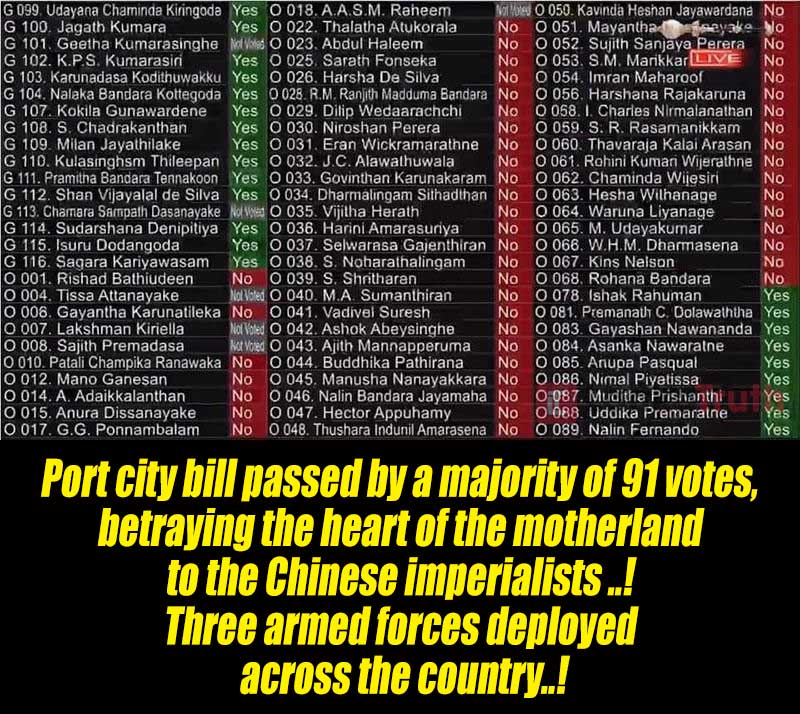 (Lanka-e-News 21.May.2021, 11.00AM) The Colombo Port City Economic Commission Bill, betraying the heart of the motherland to the Chinese imperialists on May 20, 2021, similar to the Kandyan Pact that betrayed the kanda udarata to the British Empire on March 2nd was passed by a majority of 91 votes in the parliament yesterday 20th with the amendments said to include recommendations made by the Supreme Court.

People do not know what these amendments are and even the opposition parties in the parliament got only a few hours to study the amendments. The bill was put to a vote yesterday (20) for the second day in a row after a two-day debate as the country was weary of the corona epidemic.

There were 149 votes in favor during the third reading of the Bill and 58 votes against it. The required number of votes for 2/3 of the Parliament is 150. Accordingly, the bill was passed by a majority of 91 votes, one vote less than two-third.

All the Gotabhaya traitorous parties voted in favour of the bill while the patriotic groups of Samagi Jana Balawegaya, Jathika Jana Balawegaya and the Tamil National Alliance voted against it.

Anuradhapura District Parliamentarian of the All Ceylon People's Congress Rishad Bathiudeen, who is currently in remand custody, representing the Samagi Jana Balawega Ishaq Rahuman and Puttalam District MP Ali Sabri Rahim joined the government and voted in favour of the bill. However, Rishad Bathiudeen and the party's Digamadulu District MP Musharraf voted against the bill.

Fourteen MP’s were not present..

Fourteen MPs were not present at the time of voting. When Speaker Mahinda Yapa Abeywardena asked Chief Opposition Whip Lakshman Kiriella whether he would call for a vote on the bill, MP Kiriella said the speaker that no vote would be taken but the obection should be recorded. Subsequently Jathika Jana Balawega MP Vijitha Herath called for a vote on the bill. Accordingly, the second reading vote was held.

Thereafter, the Minister of Justice Ali Sabri introduced the amendments of the Government during the committee stage and the Opposition requested separate voting for certain amendments.

Several amendments made by Dr. Harsha De Silva of the Samagi Jana Balawega were rejected by a majority. Voting on the bill began at around 4.40 pm yesterday and the votes were cast electronically.

Members of the Samagi Jana Balawegaya staged a protest opposite the entrance to the parliament in the morning, protesting against the bill before the parliamentary vote.

The protest was led by the Leader of the Opposition Sajith Premadasa and was attended by a large number of parliamentarians, civil society representatives and lawyers. MP Buddhika Pathirana set fire to the bill and protested.

Protesters displayed various slogans such as "Then it was Don Juan Dharmapala and now it is Don Juan Nandasena", "The hero who came to protect the country sold the whole country", "Sir aren’t you shame and it is very ugly", "Sells the Sundara Siri Barani land". (Photos of the protest are shown here)

The government deployed the army and sprayed a black liquid on all the posters pasted by the JVP in Colombo today against the bill. After the bill was passed, the president called the three armed forces to maintain public order in the country.

The president issued a special gazette notification by calling Sri Lanka Army, the Sri Lanka Navy and the Sri Lanka Air Force accordingly, to maintain public peace throughout the country with effect from tomorrow 22nd for a period of one month. 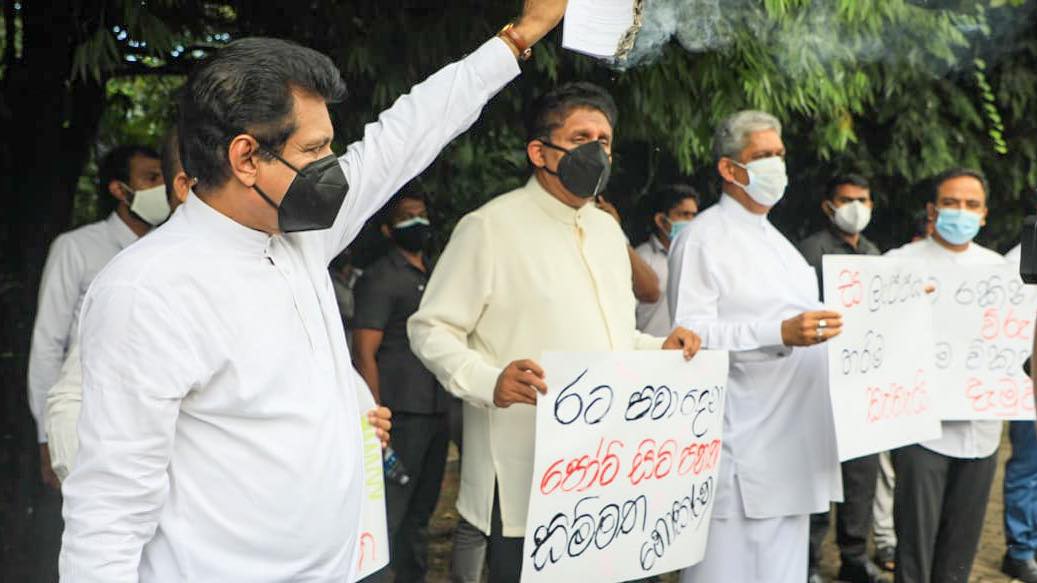 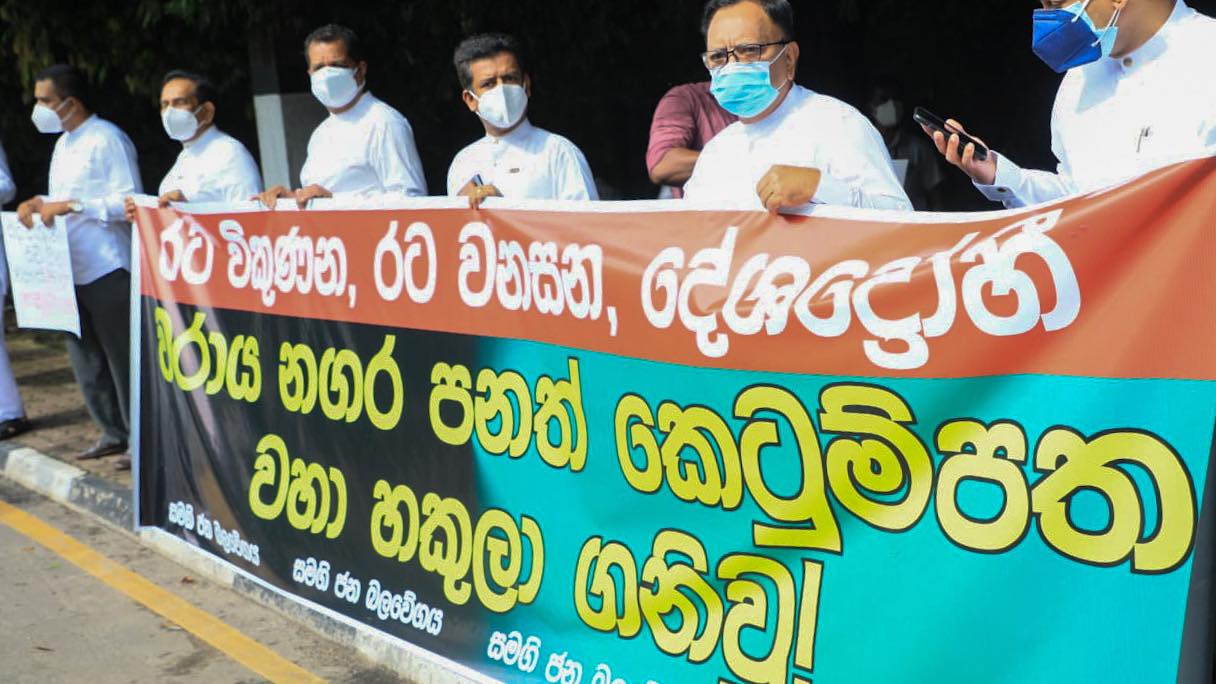 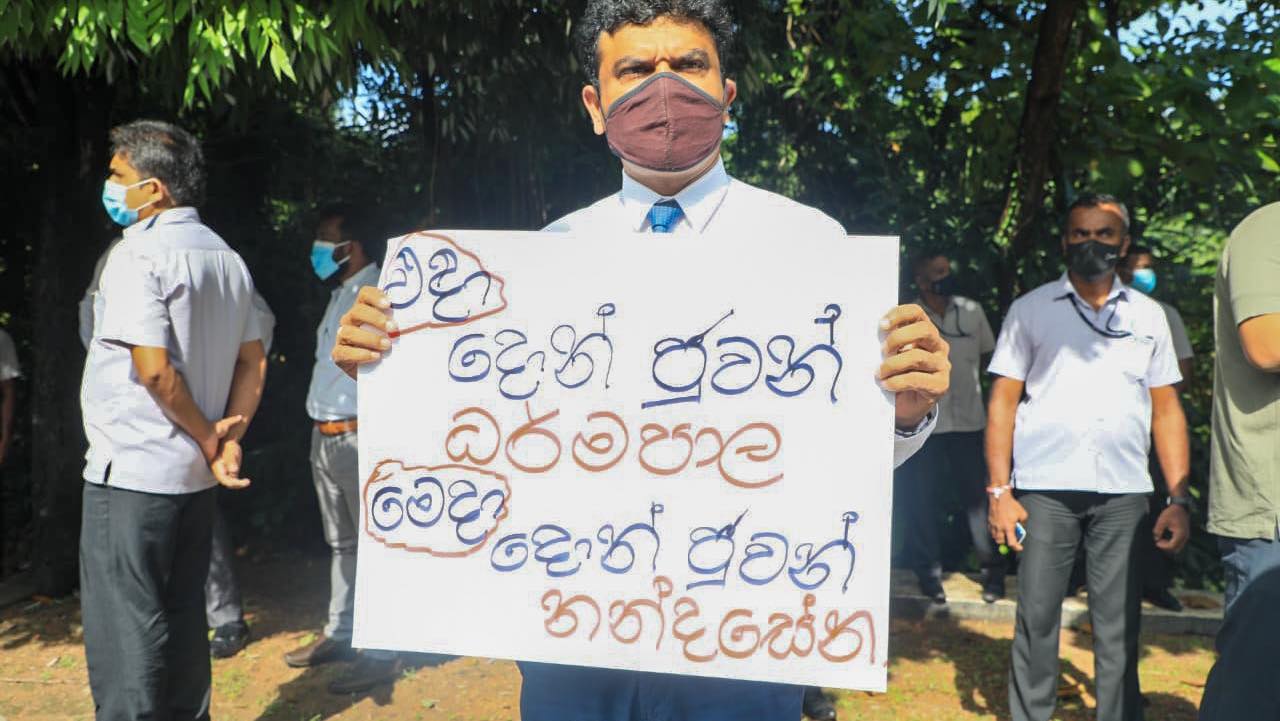 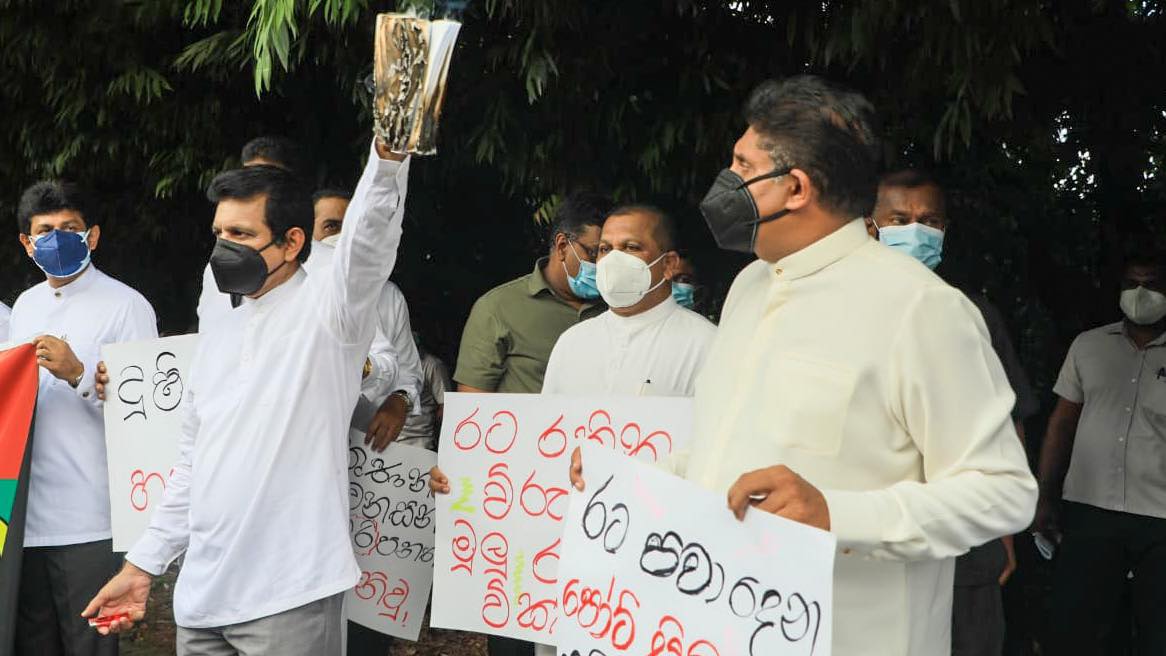