Army robs whiskey from Sathosa..! Shavendra gave the orders..! Here are 14 charges against the culprit Shavedra who plays with the law..! 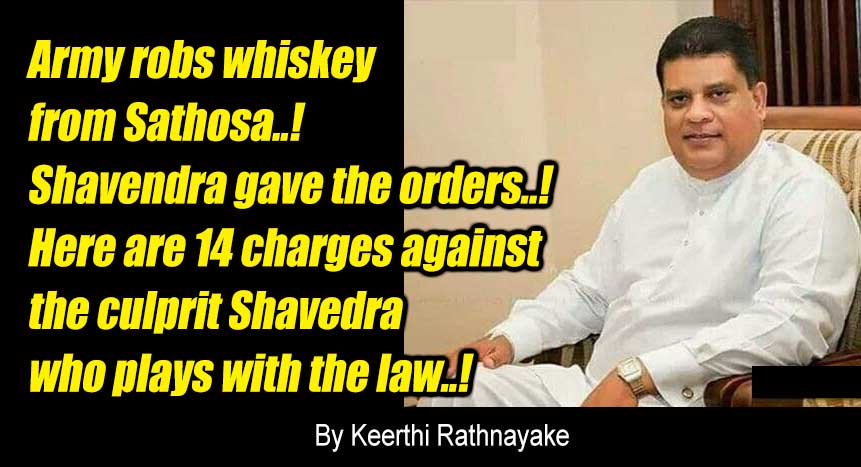 (Lanka-e-News -17.June.2021, 8.15PM) Inevitably, a legal framework for crime will emerge in a country ruled by a group of rulers whose philosophy of life is theft and slander. In addition, a culture of praising crime is emerging. That is the tragedy what has happened in Sri Lanka today.

Liquor robbery is not small but 89 bottles

The country's executive president 'locked down' the country by imposing travel restrictions to curb corona. But Sarath Weerasekara and Chandimal did not consider that order. Even before the heat of the Sarath-Chandimal case subsided, Army Commander Shavendra had played with the law. It has been revealed that Army Commander Shavendra Silva was behind the 89 bottles of liquor stolen at the Anuradhapura Sathosa super liquor store. An Additional Commissioner General of Excise has already visited the area to investigate the robbery carried out by the Army. The report is to be handed over to Prime Minister Mahinda Rajapaksa and Sathosa Minister Bandula Gunawardena.

Leaders merry while people die on the road

Born in 1964, Shavendra is 57 years old. He has only two months left in his service. He is due to retire next August. But Shavendra and his wife Sujeewa are two people suffering from aristocratic hysteria. These two cannot live without VVIP treatment. At the moment Shavendra is requesting another service extension. But Mahinda does not agree to give it. Shavendra recently visited Gnana Akka's temple in Anuradhapura hoping for help. Shavendra and Sujeewa did not forget to throw a party during the trip. It was during this time Sathosa warehouse was broken and whiskey was stolen for the party. Oops! People are dying on the streets, and the army commander is having fun partying despite royal orders.

Squeezing the ass of the virgin of the law

Every citizen must act responsibly when the country is facing an epidemic. People must abide by the laws and regulations applicable in the country. But Shavendra put the law of the land to the dog. This liquor robbery at the CWE liquor store is a numbing story. This is similar to pressing the ass of the virgin of law in front of millions of people. It is a tragedy that Shavendra Silva, the head of the Presidential Task Force on Repression of Kovid, is acting in this manner. Even a thief politician has ever flouted the law in such manner. The following allegation is not the first allegation against Shavendra. A book could be written from the charges against him. Some of them are as follows.

Many believe that Shavendra Silva was a character was who commanded the 58th Division. But the real story is quite different. Shavendra became a hero not because of his prowess on the battlefield but because of the media coverage given by Saman Kumara Ramawickrema. When officers like Kamal Gunaratne faced the enemy and fought, Shavendra wore make-up and spoke in front of the cameras. Shavendra's struggle was not through work but through media shows. Sordid Journalists also infused Shavendra by getting free whiskey from him.

It was alleged that the gold seized from rom the Tamil people by Ramawickrama and Shavendra was being brought to Colombo and sold. Complaints about this flowed to the police. During a road check police seized several kilos of gold transported by Ramawickrama. At the time, even top government officials were involved in the gold smuggling. Therefore, it was necessary to cover up the smuggling of gold from the North to the South. Ramawickrema hid the news he had caught with the gold and reported that he had been caught in a laptop racket. Ramawickrama was suspended due to this allegation. Ramawickrama was furious that he had become a sparrow after escaping the sharks in the gold smuggling racket. After a while, Ramawickrema fled to a western country and leaked video evidence of war crimes committed by the Sri Lankan military.

Shavendra got caught red-handed in an exam fraud during Staff Training Course at the Bataland Defense Services Command. Shavendra was convicted under the moral turpitude wise conductor Unbecoming An Officer And Gentleman.

During the fourth Eelam War at Muhamalai, the government forces suffered a severe setback. The book written by Kamal Gunaratne has also written about this. During the battle of Muhamalai, LTTE captured our tanks of the troops commanded by Shavendra. Many government soldiers were killed by these tanks. That defeat was due to nothing but Shavendra's weak leadership.

While on duty at the United Nations Permanent Mission to Sri Lanka in New York, Shavendra molested Chandula Rambulwella (daughter of Keheliya Rambulwella) Chandula complained to the authorities. An investigation was also carried out in this regard. However, Shavendra escaped from this from the pressure to cover up the incident.

The story was told to the author by a well - known businessman in New York, a friend of Shavendra. While Shavendra was in New York, his two bodyguards were sent for domestic works at the homes of Sri Lankans. The soldiers received between 100 to 200 dollars as claimant but they were obtained by Shavendra.

After Shavendra becoming the Army Commander, he has a separate room and staff to put make-up. This is located not at Shavendra's house but attached to his official office. Shavendra comes to work first and puts up his make-up. Then he spends Rs. 6,000 and buys two bouquets of fresh flowers, onne for his office and onne for his home. This is a daily expense is borne by the army and paid to Shavendra's wife who supply these to Shavendra.

During the time of Shavendra when he was a Colonel, he complained to repair the roof of his house. Now he owns a three-story palace opposite to parliament. Shavendra's house is located bordering one side by the Diyawanna Oya. On the night of November 11th 2020, Prabhath Madusanka and Rajendra were fishing in the Diyawanna oya by a boat. Suddenly Shavendra's soldiers came in a motor boat and attacked the boat. Rajendra died immediately, Madhusanka, who escaped, lodged a complaint with the Welikada Police under CIB 03 142/34.

The Hiru TV aired a few seconds of news about the incident. The wife of the deceased Shani Madhuwanthi's story was heartbreaking. "We have no money to live, that's why my husband went fishing. We have a one month old baby. He didn't even have a name yet. My husband loves him. He always carries the baby in his arms. We don't have him now ... Why did the army do like this? '' The crime has been covered up.

As soon as Shavendra became the Army Commander, he bought millions of office equipments. The chair he bought was worth Rs. 300,000. Shavendra makes a big scam out of diaries, pens, calendars and watches that he present for the New Year. Former Chief of Staff Major General Nirmal Dharmaratne protested against this fraud in front of Shavendra.

The physical fitness of a member of the army is an essential factor. Every Army member, including the Army Commander, has a Body Mass Index (BMI) test and must comply with the Army Physical Fitness Test (APFT). Shavendra has chubby and a plump body. He looks like a moneylender, not an army officer.

Appointing Shavendra as the head of the Corona Suppression and subordinating the medical professionals to him was like letting the monkeys to run ad letting the horses to climb trees. Both, president and the Prime Minister, as well as the incapacitated Shavendra, are primarily responsible for the tragedy that has befallen the country today.

Bangladesh's military contributes 3% of GDP by UN peacekeeping forces. This is a huge contribution to the country's economy. The Sri Lankan army could have reached such a position, but Sri Lanka has lost that position because of Shavendra. The UN has ignored Sri Lanka as a war criminal has been appointed as the Army Commander. This is a great loss to the country. It is a dream of the soldiers to go to a UN mission and buy a house and a vehicle. But that dream has also faded because of Shavendra.

At present, Sajath Mawsoon, the owner of Pyramid Wilma, has a monopoly on imports of consumer goods including sugar, coconut oil and dhal. About a decade ago, this trade authority was owned by Nadarajah Sri Skandarajah, head of Kala Traders. The businessman was abducted in 2006 by an extortion gang led by Air Force officer Nishantha Gajanayake. Later millions of extortions were taken from and he was killed. At that time he had assets worth Rs. 300 millions. Many of these properties were looted. Shavendra was also involved in the robbery. If anyone looks at who looted the property of C7 Sea Fruit Bar & Coffee Lounge, No. 95, Wijerama Rd, Colombo 7 one can understand the truth behind this.

Gotabaya Government closed the airport to the workers in the gulf who had lost their jobs and could not return home. He then introduced a quarantine package and brutally embezzled money of those workers. According to the package introduced by Shavendra, a poor worker had to spend around Rs. 300,000 to come home. Expect a report by LEN on this crime and how the money was distributed.

Point the finger instead of applauding corrupt officials..

Sri Lankan law is like a spider's web. The weak are trapped like ants. The powerful flee from the law like wolves. The police and the judiciary act like bulls and grass in front of them. The facts are therefore that citizens should be keen to identify foxes covered in lion skin as well as wolves in sheep skin. Instead of applauding corrupt officials and the rulers, people should have a backbone to point the finger at them because such corrupts, not only dirt the dreams of the people of our time, but also the future generations.