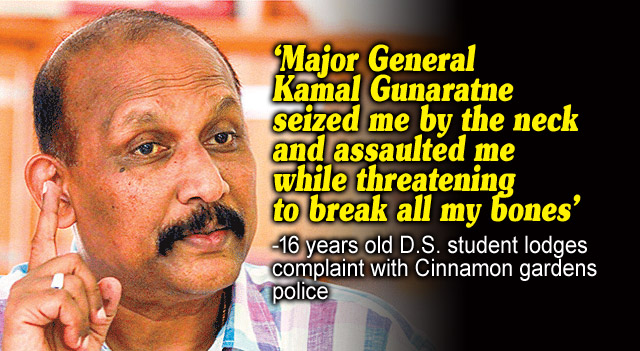 (Lanka-e-News -17.Dec.2016, 11.30PM) The student who was assaulted and threatened with death by retired major general Kamal Gunaratne last Wednesday in front of D.S Senanayake College ,Colombo, immediately after answering the final question paper of the GCE O/L exam which he was sitting , had lodged a complaint with the Cinnamon Gardens police.

Earlier on the assailant had made a complaint to the Cinnamon Gardens police that the victim is a member of a group of extortionists , and that complaint was scheduled for inquiry today. Since four more students were implicated in the complaint , all those students also  appeared at the police station.

When the student who was attacked by Kamal Gunaratne and his mother visited the police station and were making  the complaint regarding the attack and the murder threat , because a group of the army intelligence division arrived and exerted pressure , the police had at first been reluctant to record the complaint.

When the police questioned from the mother and child why the complaint was not made when the incident happened  as far back as last Wednesday ? The complainant had explained , since the victim was sitting the GCE exam, and he had to focus on that  which is a priority ,  making the complaint was delayed  until the exam was over today.

Finally , the complaint No. CIB 2 -345/154 of the student was recorded under ‘miscellaneous complaints’.

On the 14 th of December (Wednesday) , when the GCE O/L exam was in progress, during the recess , Kamal Gunaratne who arrived had seized the victim by the neck and yelled out  ‘You better know who I am. I shall break your bones.’ A School teacher who appeared on the scene had told Gunaratne , that the victim has to answer a question paper in a little while ,and has saved the child.  The victim thereafter could not answer the paper well because of the fear psychosis that gripped him , and the traumatic experience  , in the complaint it is mentioned.

The victim had also mentioned that later on , he came to know a child who is a relative of Gunaratne has made a complaint , but the victim had nothing to do with that incident though he learnt that the  child who is Gunaratne’s relative had been involved in it.

Meanwhile the students who appeared at the police station stated , the complaint made by Gunaratne’s relative (student) against them are false , and that can be verified if there are CCTV cameras around the school, and if  those tapes are examined the true picture can be unraveled.  The students had also in their statement mentioned  , because they were asked by the police to come to the station today , they were in mortal fear , and they faced today’s exam in  that frightened  frame of mind.

The victim and the other students told the police , there were a number of eye witnesses who would testify to the attack launched on the victim by the retired major general.

Based on reports reaching Lanka e news , the other parents who witnessed the assault are ready to testify. They say , if they are to keep silent , the officers of the forces would fasten the ‘ war hero’ label , and attack the other children too with impunity , and even their young daughters will not be safe at home .

This ruffian Kamal Gunaratne retired on 5 th September 2016.  At the trial of retired General Sarath Fonseka it was revealed by the military court the disciplinary code  of the army is applicable to a retired officer until six months have elapsed after retirement . Hence, Kamal Gunaratne who behaved like a ruffian by attacking a 16 year old student and threatening him disrespecting the code of discipline and bringing disrepute on the army  shall be compulsorily hauled up before the military court , a high rung army officer disclosed to Lanka e news.

The same high rung officer went on to question ,  if an army commander who commanded the entire army and won the war can be hauled up before the military court , why should n’t an ordinary Brigadier who commanded a small group be hauled up before the military court ? If punitive action is not taken , more army officers would take the law into the hands while claiming  they took part in the war , and behave like mad dogs in the street , with the result the entire army can be disgraced beyond measure .

It is worthy of mention the father of the victim who was manhandled and attacked by this brute of an army officer , only  recently  died following kidney failure, and it is the poor victim’s mother who donated the kidney to his father . Consequently she is still under medical supervision

Footnote :
Len Is informed that there are photographs and video tapes regarding this attack , but out of fear of consequences those are not being put out . However , if there is anybody  in possession of those , please send them to our e mail address [email protected] or Viber telephone No. 0044 7400 927 826. We shall treat them as confidential so that none would get to know the details of the sender.

5 discussion on this news

These are the buggers we are forced to call war heroes? This is an act of raw thuggery. Heroes protect people. These bulluies of children are cowards in uniform. Mr. President please note. The public is not a collection of fools. You tripped up badly defending a Navy Commander with a notorious record. Do not even try to intervene here and ruin your reputation completely.
-- by indrapathy on 2016-12-17

I am waiting for the next election. nice tax with a super navy commander with a parliament so worried about people with great appreciation of educated people with good salaries and a pension with ....
-- by dileepa on 2016-12-19

If the so called "war hero of Nandikadal" could wish to kill a schoolboy, perhaps The Road To Nandikadal was paved with similar horrific murderous intentions!
-- by hikmeeya on 2016-12-20

This is a very serious allegation.History tells us that when the dictator military regime which had killed thousands of its own people, fell in Argentina, ex military men started resorting to kidnapping and extorsion as a new way of life. Is Yahapaalanaya asleep? What are thry doing to get rid of these most dangerous criminals like rottenand poisonous left over food by a previous most corrupt and murderous regime?
-- by Karu Pelpola on 2016-12-22