President shields criminals and misleads cabinet –provoked Rajitha blasts him ; Gamarala walks out in a huff ! 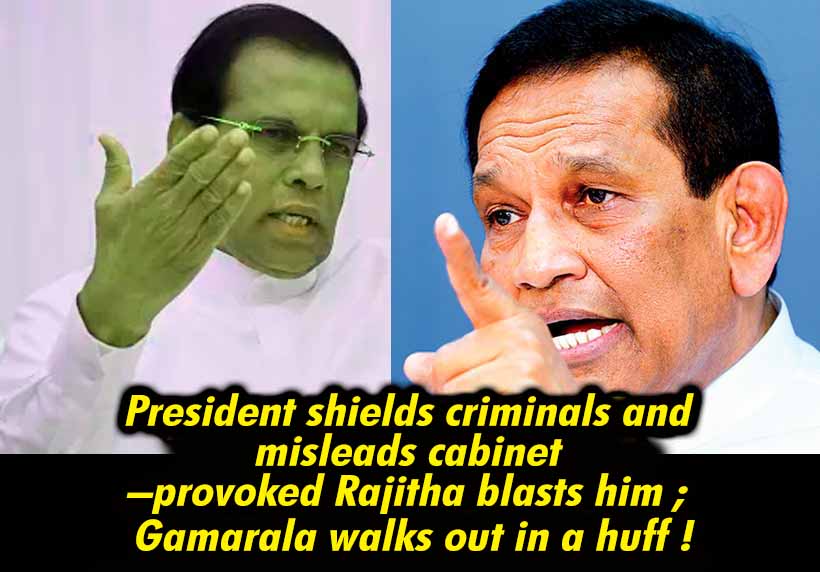 (Lanka e News - 15.Sep.2018, 9.45PM) In the multiple murder of 11 individuals , while the police were searching for a prime suspect in that connection , if any individual is to harbor , hide , protect and assist that suspect to flee the country after giving him cash , that individual is considered as a criminal who aided and abetted in the commission of that multiple crime according to chapter five of the Penal code.

Such a wrongdoer is liable to half the punishment of that meted out to the criminal who directly committed it. That is ,if the direct murderer is sentenced to death , the individual who aided and abetted is liable to a life sentence in jail.

The above salient points are being published in order to make known to the people the true position amidst attempts made by the president to misled the cabinet yesterday (13) after convening it.

It has by now become crystal clear , it has all along been the aim and ambition of the president to mislead the cabinet and even halt the CID investigations into the ghastly multiple murders which shocked the entire world - abduction and heartless murder of 11 persons including innocent students after committing extortion , and subjecting them to torture within the torture chamber of the Navy in Trincomalee . The bodies of the victims were finally dumped in the seas.

Two ex Navy commanders have been charged supported by cogent evidence with having conspired , as well as aided and abetted the criminals in these brutal crimes. Shockingly ,it is in these circumstances the president yesterday deplorably sought to mislead the cabinet , halt the criminal investigations and rescue the Navy commanders who are facing heinous criminal charges . The president convening a special cabinet meeting at a time when the prime minister is overseas , is itself a clear index , what is the criminal intention and cruel ambition of the president .

Though these murders and heinous crimes were committed during the period of the last criminal corrupt decade of the Rajapakse government , the Rajapakses did not have a direct involvement in it. This crime was a result of the cruel ruthless actions of a few Navy murderers who took the law into their hands during the Rajapakse nefarious decade .

When these crimes came to light , the then chief of the CID Sisira Mendis reporting this to Gotabaya revealed , since this can create a conflict between the police and the forces, punishment shall be meted out to these brutal criminals by a court of the Navy and they shall be punished duly.

Gota who called for details from Mendis, having realized the gravity of the crimes exclaimed, ‘this is a very serious crime. We cannot get ourselves entangled . Hence let the CID continue with the investigation.’

After the CID requested the instructions in writing, the written order of Gota was handed over to the CID investigators by Mendis.

Unbelievably and deplorably it is the former Navy Commanders who are incriminated in these heinous crimes which even rudely shocked crude notorious Gota , the good governance president is today seeking to shield and safeguard.

Evidence of minister Felix against Karannagoda

Vasantha Karannagoda is one of the Navy commanders directly implicated in this heinous crime. It is none other than Felix Perera who was the minister of fisheries in the Rajapakse government at that time who provided written evidence testifying to it. A child of a very close friend of Felix Perera too was also abducted and made a victim of extortion of the Navy murder squad.

While that child was in the torture chamber , an individual who accidentally helped , gave a call to the parents and informed them of the dire predicament they are in , giving details. When the parents met Felix Perera and apprised him of it , the latter had asked from Vasantha about it via phone.

Vasantha has thereupon told him the children were in the Trincomalee camp , and had promised they will be released (tomorrow)the following day. Because it will be used as evidence if they are released , the following day permission had been granted to kill the victims and dumped the bodies in the sea. Felix Perera himself has given evidence orally and in writing to the CID in this regard .

It is such a criminal navy commander the president is most shamelessly trying to shield and safeguard even by duping the present cabinet . It is a pity the president has forgotten he too was a member of the cabinet with Felix Perera during that period.

The present chief of staff and former Navy commander Ravindra Wijegunaratne whom we have mentioned in our preamble is incriminated based on charges of protecting , harboring ,hiding and helping the prime suspect to flee the country.

There is evidence that Navy Sampath while he was in the Navy headquarters was eating and drinking from the canteen .There is a notebook in which his drinking and eating on credit are recorded . Subsequently Ravindra the chief of staff has given Navy Sampath Rs. 500,000.00 and smuggled him to Malaysia. Navy Sampath who is now in custody had confirmed this .

Based on all the copious and cogent evidence , Ravindra is liable under chapter 5 of the Penal code for aiding and abetting in the murder of ghastly ruthless murder of 11 individuals among whom were innocent students. When the CID summoned Ravindra recently to record his statement , on the same day in the early hours of the morning he fled the country , which was orchestrated by president himself for the sole reason to hoodwink the cabinet which met yesterday .

A chief of the security council of the forces cannot leave the country without the knowledge of the commander in chief of the country. In the circumstances the day president Gamarala loses his immunity , his liability under chapter 5 of the penal code of giving consent , aiding and abetting in the gruesome multiple murder of 11 individuals will be inescapable. .

Why is Gamarala so hell bent on saving Ravindra ?

President has no reason or right at all to conduct himself this disgracefully and deplorably , because he received a mandate from the people to apprehend the criminals of the last corrupt nefarious decade and bring them before the law , not to shield and safeguard them ..

After president Gamarala came to power a Human rights joint resolution was passed in Geneva that investigations shall be conducted into six grave crimes during the nefarious decade to which the SL government also assented.

This multiple murder after abducting and committing extortion is among those six heinous crimes. Hence , president Gamarala cannot rescue these criminals and those who aided and abetted from the arms of the law by citing their rank or status- navy commander.

Then , why is president Gamarala still vehemently and specially insisting on saving and shielding Ravindra Wijegunaratne ? Obviously this is because Ravindra helped him to put through the Russian warship deal .

It is significant to note , three committees were appointed by the predecessors of Ravindra in connection with the Russian warship deal . All three committees said the warship is not suitable for SL’s Navy. It was one and only Ravindra Wijegunaratne who later danced according to the tune of president Gamarala. After appointing a committee it was recommended the Russian warship is suitable ,thereby Ravindra helped Gamarala to line his pockets with many millions of dollars . Hence , can Gamarala who is always venally inclined forget that ?

‘It is you standing in the way and obstructing the arrest of crooks and criminals’- Rajitha tells Gamarala to the face !

President Gamarala at the cabinet meeting yesterday told a profusion of lies that the government is being driven into embarrassment when the CID summons the ex chiefs of the forces , in order to deceive the cabinet wholesale. He once again proved he is more a clown fit to perform in a circus and less a president to head a country when he said at the cabinet meeting , ex Navy Commander like Kamal Gunaratne a ‘hero’ is being summoned to the CID , and he is against it. Rajitha who was naturally provoked by this stupid statement , told directly to the face of Sirisena alias Sillysena, ‘the Kamal Gunaratne of yours was never with the good governance government . They were always with the opponents. 6.2 million people voted for us to catch these murderers . You are the one obstructing the apprehension of crooks and murderers. ’

President walks out of the cabinet meeting in a huff…

Gamarala who flew into a rage threw back his chair and walked out of the meeting . Incidentally this is the second occasion Gamarala has behaved like this at a cabinet meeting, in much the same way as a piqued and peeved Kindergarten child who rushes out of the classroom to do a pee .

Poor Gamarala was later consoled and ‘cooled down ’ by senior UNP ers Gamini Jayawickrema Perera and Vajira Abeygunawardena who went and fetched him to resume the meeting.

Only Champika Ranawaka , Mahinda Samarasinghe , Gamini Jayawickrema Perera and Sujeewa Senasinghe spoke in support of the president who was despicably leaving no stone unturned to protect and save the criminals of the forces from the arms of the law. Champika and Samarasinghe even went beyond Sirisena to shield the criminals. Nothing was more reprehensible than that.

Among those who pinpointed the faults of the president were Mangala Samaraweera and Faizer Mustafa . It was Rajitha Senaratne who always espouses the cause of truth and genuine national interests fearlessly and forthrightly took a fiery stance and opposed president vehemently.

President who is sympathetic towards murderers has no concern for the students who were brutally killed!

Be that as it may , president Gamarala who is always in fury against and in fear of Lanka e News had warned and given specific instructions to all the members at the cabinet meeting that what happened at the special cabinet meeting should not be leaked out. .

The president who said this and behaved most grotesquely at the cabinet meeting however has published a report via the Lanka deepa making use of a stooge of his under the name ‘Agalakada’ , which is as follows ….

Haven’t the heartless scoundrels who are showing so much concern for the criminals who conspired to commit this ruthless heinous multiple murder of students ,as well as aided and abetted in those crimes , any sympathy towards the innocent victims who were killed like mice ? Mind you , one student who was murdered in cold blood had successfully completed his GCE adv. Level exam , and was to leave for UK to pursue his medical studies. To celebrate his success and impending overseas travel he had gone out with his friends in the night for a dinner when all of them were abducted and killed brutally after even collecting extortion payments.

Unbelievably , it is towards such ruthless heartless murderers president Gamarala is showing so much concern, and mind you unlawfully too . In the circumstances can there be a worse ruthless rascally ruler than he ? Though he is a father and having children , he has no love for the children of other parents because he and his children only know about love for filthy lucre.

It is high time the UNP at least at this belated stage decided whether is it still going to follow the perilous road to perdition of Gamarala who has steeply dropped to a 4 % popularity base , and dig its own grave ? Or stand steadfast with the people and their mandate of 2015.