Is this a Court of Appeal or a convergence Court? Sabri-Nawaz double enforcement is not even the Sharia law but the devils law 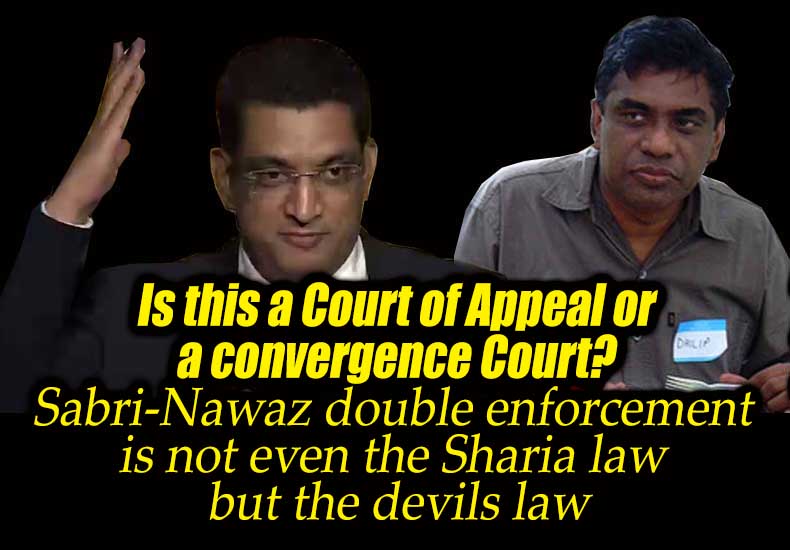 (Lanka-e-News -25.Nov.2020, 11.30PM) The Court of Appeal of Sabri-Nawaz, which is currently hearing criminal cases in Sri Lanka on a daily basis, issued a writ order on the 20th dismissing the indictment filed by the Attorney General in the Kandy High Court against Minister Janaka Bandara Tennakoon, who was the main accused in a murder case in the Mahawela area in Kandy in the year 1999.

This wonderful verdict was give by Judges A.H.M Dilip Nawaz who was appointed as the chairman of the court of appeal and Sobhitha Rajakaruna.

The reason given for the nullification of Janaka Bandara's indictment stated that it was incorrect to hold a non-log magistrate's hearing in one day without the presence of the suspect and file indictments in the High Court on the hearing. Janaka Bandara had also stated that the case filed in 2015 is a political revenge.

Who undermined the case for the last 16 years?

The first question to be asked is by whose authority a murder case happened in 1999 was kept covered for 16 years until 2015. Janaka Bandara had the political power to cover up the case against him in the Attorney General's Department during Chandrika's presidency and then Mahinda Rajapaksa's presidency. Is filing an indictment for a case that has been under wraps for 16 years a political revenge or duly enforcing the law? Today Janaka Bandara has able to dismiss the case using his political powers follwoing Gotabaya's arrival. The truth is that, a political power has been used not to prosecute but to cover up and dismiss the case.

We told about Dilip Nawaz sometimes ago..

When President Gotabhaya appointed judge Dilip Nawaz as the Chairman of the Court of Appeal last February, this correspondent revealed in detail to Lanka e News on the same day that he is not at all suitable for the post because the latter is the main accused in a bribery case pending in the Magistrate's Court amounting Rs. 260 million.  To this day no one has denied any of the allegations we made then. (Read -''An accused in a bribery case and a 'thief' who disappeared 80 lawsuit files takes up the Chairman of the Court of Appeal'' -published by LeN -16 Feb 2020)

In a government where murderers sentenced to death by the High Court are allowed to sit in Parliament people are speculating whether a parliamentary minister will be charged with murders. These events completely erode people's confidence in the judiciary and the law. What happens then is that the people takes the law into their hands which ends in severe destruction.

With the acquittal of Lalith Anusha from the Sil fabric case and the nullification of Janaka Bandara's murder charges, people are questioning is there a Court of Appeal in the country or a convergence Court?

Sri Lankan people who are just must understand that what is being enforced in the country today through the Convergence Court of Sabri-Nawaz Double is not at least the 'Sharia law” but the devils law which must be opposed.