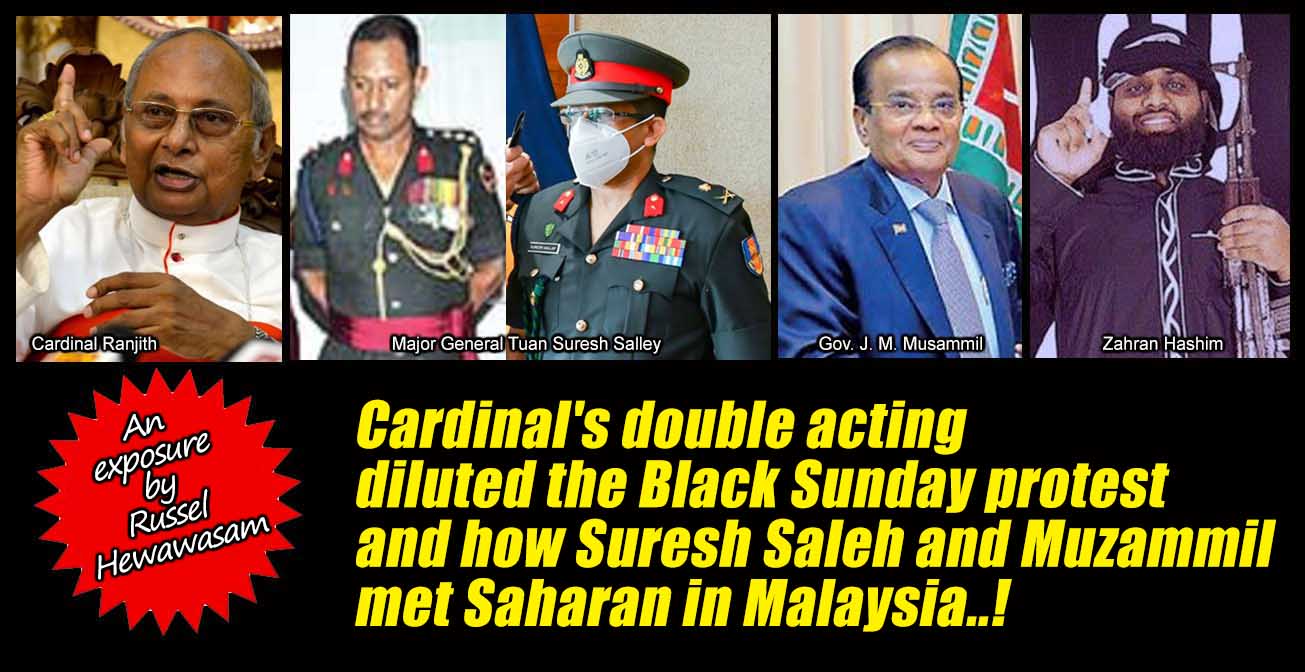 (Lanka-e-News -18.March.2021, 2.25PM) The Black Sunday protest held on March 7th against the current government's failure to bring justice to the perpetrators of the April 21 Easter attacks were somewhat successful. The Sri Lankan Catholic community, as well as non-Sri Lankan Catholics and non catholics around the world, dressed in black and joined the protest. We must also appreciate the silent protest held in countries such as Italy, France, England, Australia, Canada, the United States, Germany and Sweden.

However the peaceful protest 'demanding justice for the tears of blood' on behalf of the loved ones who were brutally murdered on Easter Sunday 2019-04-21 has now been foiled.

Cardinal Malcolm Ranjith repeatedly appealed to the government to hand over the full report of the Presidential Commission investigated the Easter Attack. The procrastinating government eventually sent only one volume of the investigation report to the cardinal a few weeks later.

The report has 87 volumes. Out of these, 22 volumes have not even been handed over to the Attorney General casting security reasons. They are hidden. Only one of the remaining 65 volumes is forwarded to the Cardinal. It appears the volume containing the recommendations is the one given to the cardinal.

However the full report of the Presidential Commission, which spanned more than a year and a half, The Catholic Bishops' Conference of Sri Lanka, led by the Cardinal, wholeheartedly accepted the Easter Report, betraying the protest of the Catholic people by simply reading one volume without studying the rest 65 volumes.

Despite allegations by pro-government parties that parts of the Presidential Commission report have been removed or distorted with the connivance of the current government, the fact that even people like Minister Wimal Weerawansa have publicly stated, there are groups protecting extremists involved in the Easter attacks within the current government, in an atmosphere where 22 volumes have not been hidden and handed over to the Attorney General, did the Catholic Bishops' Conference, led by the Cardinal, read and accepted the incomplete report by divine power? The question arises before us.

The duplicitous role played by Cardinal..

The duplicitous role played by Cardinal Malcom Ranjith is providing jokes to the country by his pulsating statements that he would go the international courts to seek justice, later giving different meanings casually to his own statements, is dissolving the prestige and the power, the Catholic Church has built over the centuries. So far no positive steps have been taken by the cardinal to bring justice to the Easter crime. The only action taken was the Black Sunday protest but that too was dissolved within days.

Speaking at a press conference, the cardinal said he is not in agreement with the recommendations of the Buddhist Commission that the extremist organization such as Bodu Bala Sena should be banned and that he had no problem with the Buddhist community. The commission's recommendations called for the banning of not only Bodu Bala Sena but also Muslim and Catholic extremist groups. The cardinal accused the Presidential Commission of doing unnecessary things with such recommendations. Now the Cardinals 'Bishops' Conference has requested the government to give full power to the Attorney General to implement the recommendations of the report. Such irresponsible comments indicate that the cardinal is refuting his own statements he made earlier. His earlier bold questions "Whose purpose is this attack? For what purpose did these innocents fall prey? Who directed the attack?" are not raised now.

The very acceptance of a commission report that has not exposed by the masterminds which has concealed the support of the donors is an aid paving a way for more political transformation in the future to carry out such genocidal, despicable and barbaric attacks in the country. Should the Catholic Bishops' Conference, including the Cardinal, have wisely call to ban and confiscate assets of all religious extremist organizations, regardless of religion and rank, to ensure that the positive elements in the recommendations of this incomplete report are not acted upon to prevent the attack? In addition, the main priority is to call for an international inquiry into the current government's failure to investigate about intelligence officials who had links with extremists, including Saharan, to expose the perpetrators of the attack. No one can challenge such a justification.

Cardinal who did election campaigned for Gotabaya..

Gotabhaya Rajapakse used the Easter attack entirely to his political advantage to run for the presidency. The latter said he would run for the presidency less than a week after the attack to defeat Islamic extremists. That barbaric attack in particular was a blessing in disguise for him alone. Nationwide posters were pasted "Do you remember the 4/21, Easter attack?" Don't forget to go to the polls in the morning and use your vote for Gotabaya.

Cardinal regularly addressed the nation through the media how the Maithripala Ranil government has brought international conspiracies to the country, weakening state intelligence, opposing the arrest of members of the intelligence services directly involved in crimes, weakening the national security, opposing the Geneva Human Rights Commission, and the emergence of extremists in the country.

The Cardinal has repeatedly stated that he has no faith and consensus or approval for the manner in which investigations into Easter crime being carried out during the period of good governance and that the country needs a leadership that has the  backbone to do so. The service rendered to the Pohottu camp by the Cardinal during the election period was later commended by Gotabaya Rajapaksa and his camp members.

Where is that cardinal's courage now?

Despite the Pohottu government, including President Gotabhaya Rajapaksa, taking so long to bring justice to this massacre of unarmed catholic religious people, While the cardinal deliberately diluting the emerging fair and just protests, despite the government ministers claiming without any formal investigations that there was no mastermind or other vested interests behind the Easter attack but only Saharan, despite the government's conspiracies to give importance to the fore topics including the ban on the burqa and the ban on madrasa schools and to delay the just struggle of the Catholic community over the Easter attack, Cardinal Malcolm Ranjith does not make any bold protests now like he did during the period of good governance.

Further, the Catholic Church, including the Cardinal, relied on the current government to bring justice to the victims of the Easter crime, and the open acceptance of a distorted commission report reminds us of the story of a fox which ran after a sheep.

A need of an international inquiry..

Without being biased, the time has come for all those who are silently responsible for justice of the Catholic community, as well as for all who uphold human dignity, to fight boldly for justice, as well as urge for an international inquiry approved by the civilized world in relation to justice for the Easter Sunday crime.

There are reasons emerging for what we say. We revealed information in the last article in this author's previous articles. That is, when the current Director of State Intelligence, Suresh Saleh, was in the Army Intelligence while Gotabaya Rajapaksa was the Defense Secretary. When Suresh Saleh went to Kattankudy and met Saharan and promised to facilitate the formation of the Tawheed Jamaat and fund its organization.

How Suresh saleh and casino Muzammil met Saharan in Malaysia..

Following the revelation, an intelligence unit in our region (not India), which is interested about the extremism in Sri Lanka, revealed to this writer another piece of information they found about the encounters about Suresh Saleh with Saharan.

President Sirisena appointed then Brigadier Tuan Suresh Saleh as the Military Attachee of the Sri Lankan Embassy in Malaysia. The ambassador to Malaysia at the time was the current Governor of the North Western Province J.M. Muzammil. Suresh Sale has summoned Saharan to Malaysia. Both Suresh Saleh and Muzammil have met Saharan and discussed in Malaysia. It is not known what was discussed, but Saharan has then traveled from Malaysia to Indonesia and from Indonesia to India. Later, Suresh Saleh also went to India for advanced military training in the Army. It’s a three years of training. After the Easter bombings, Maithripala Sirisena appointed Muzammil as the Governor of the Western Province. He was residing in Colombo and promoted Gotabhaya. Suresh Saleh, who went to India for three years training, came to Sri Lanka less than three years after Gotabhaya's presidential campaign started following the Easter bombing. After Gotabaya became the President, Suresh Saleh was promoted to the rank of Major General and appointed Director of State Intelligence. Normally after a change of government, the governors appointed by the previous president are removed by the new president, but this did not apply to casino Muzammil. Gotabaya also re-appointed casino Muzammil as the new Governor of North Western Province.

After the Easter bombings, Maithripala appointed Muzammil as the Governor of the Western Province. The foreign intelligence service has information about the links between Muzammil, Suresh Saleh and Saharan which lead up to the Easter bombings. They have gathered this information not out of special love for Sri Lanka but to prevent the emergence of such extremist organizations in their country.

For whose interest 4/21 Easter attack was detonated? Why innocent unarmed civilians were killed? Who directed the attack? It is in the light of this day-to-day revelation of this heinous crime that an international inquiry is essential to find real answers to such questions.

* Is the current government, the hidden hand in the Easter attack? Why did the current Director of SIS go to Kattankudy and meet Saharan?
* Easter Commission is a 'Crime Sanctification Commission'..! A need of an international inquiry is essential..!
* Bury or cremate? Crisis prolongs conspiracy..! Gota regime attempts a racist and a religious conflict...!
* Dear Cardinal, is the mystery of the Easter bomb buried under the carpet of the Archbishop's House?
* The President's Easter Commission which released multitude of suspects and closed its operation is outrageous..!
* Easter Commission report recommends that George W. Bush is held responsible for the 9/11 attacks..! Do not pretend and no more talking; Answer these four questions..!
* The Easter crime conspiracy cannot be hidden by erasing letters and removing pages Where is the FBI investigation report?