'Cannabis Diana' is a fake citizen of Sri Lanka! She has appeared in three names ..! She has a fake birth certificate, fake identity and two fake passports..! CID tells the court..! 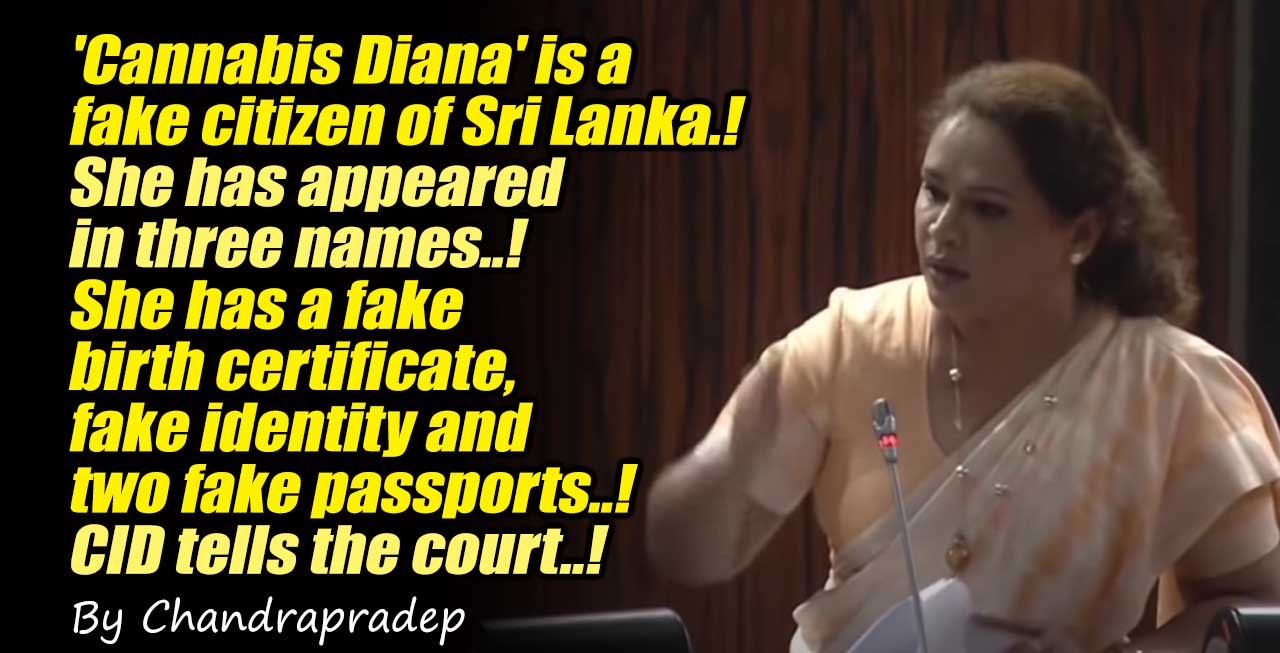 (Lanka-e-News -29.April.2021, 6.00 PM)  The criminal investigation department has informed the courts that SJB national list parliamentarian Dayana Gamage alais 'Cannabis Diana' has only British Citizenship, that she don’t have dual citizenship and she has not only obtained  Sri Lankan passport by producing a fake identity card and a fake birth certificate but she has appeared in three different names. It was this writer who revealed that Diana is a British Citizen for the first time in October 2020 through Lankaenews. (Please read https://www.lankaenews.com/news/3280/en )

The CID started an investigation into a complaint lodged by Oshala Herath, a well-known social activist. He complained to the CID that Diana Gamage is a British citizen that she concealed this and obtained two passports one diplomatic passport and an ordinary passport, from the Sri Lankan Department of Immigration and Emigration and she was living in Sri Lanka illegally. The CID conducted an investigation into the complaint and reported the matter to the Colombo Chief Magistrate's Court bearing a B Report No. B48037/01/2021.

Accordingly, Diana Gamage has appeared under three names on various occasions. Her first name is 'Nayana Samanmalee'. The name has been changed to 'Diana Natasha Kekanadurra' for the second time. Later it was changed to 'Diana Gamage' again. She has done all this to conceal her British citizenship and to show a fake Sri Lankan citizenship.

A British citizen is now illegally living in Sri Lanka...

Diana Gamage holds a British passport as a British citizen. Her British passport number is 521398876. She arrived in Sri Lanka from the UK on October 10, 2004 and has applied for a tourist Visa and Residence Visa from the Sri Lankan Department of Immigration and Emigration from time to time. The last time a residence visa was obtained was from 27 August 2014 to 16 July 2015. She has not obtained a visa since then. It has been pointed out above that she does not even have legal dual citizenship in Sri Lanka. That is, Cannabis Diana has been in Sri Lanka illegally since August 16, 2015, without citizenship or a visa.

Serious offences under the Penal Code and the Religious and Emigration Act Accordingly, the CID has informed the court that Cannabis Dayan has seriously committee an offence under Section 175 of the Penal Code and Sections 45 (1) (a) and (d) of the Religious and Emigration Act. The CID has asked the court time to obtain reports from the British Embassy on her British citizenship.

Such a fake woman has deceived the entire parliament and is spreading rumours that cannabis should be legalized in the country and that pubs should be kept open till dawn. Cannabis Diana is not only following Geetha Kumarasinghe but end up in prison. However, we should not allow her to enjoy the public money under parliamentary membership. Miserable political leaders like Sajith Premadasa who brought such a fake woman like her to Parliament who acts penetrating the public will within the dog’s anus have also committed a grave mistake. The public must take the lead against the squandering of public money on this cannabis woman named 'Diana'.

Related News
Diana Gomage was a dual citizen when she is sworn in..! Geetha's fate for her too ..! Here is the evidence with Diana's history !!