Fight against illegal detention in quarantine wins..! Stalin, Nagamuwa and others released..!

A report on the slight withdrawal of Gota’s military dream. 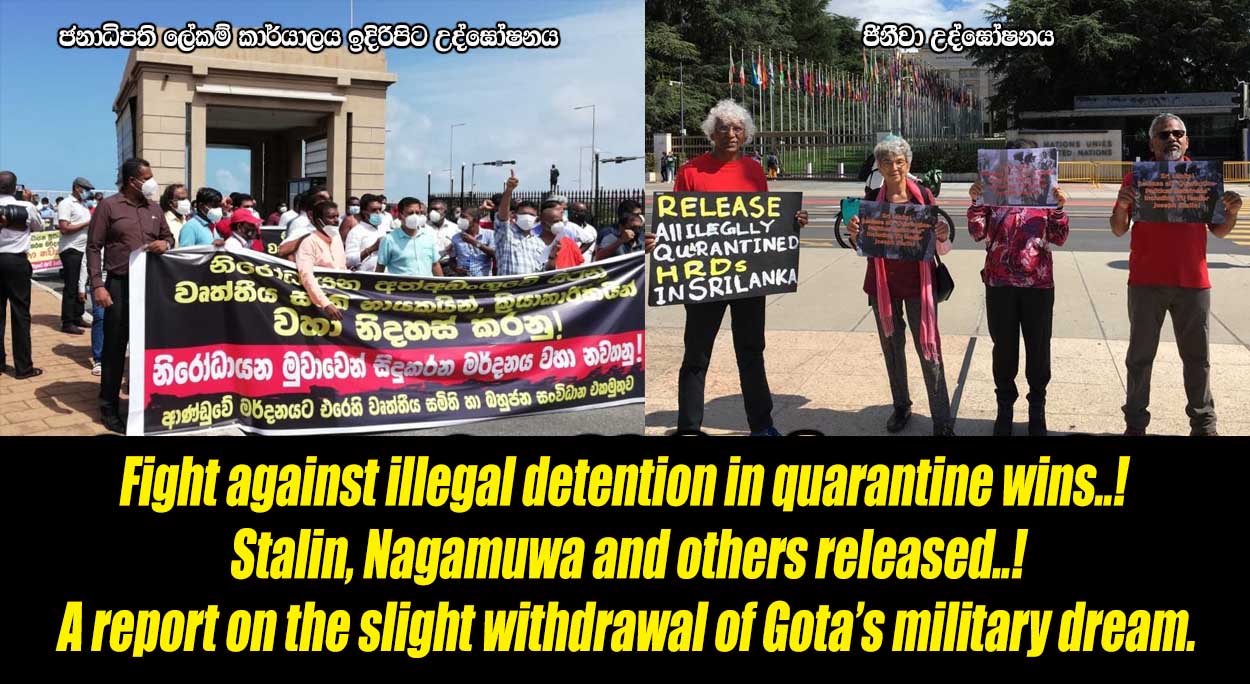 (Lanka-e-News -19.July.2021, 2.45PM) A group of 31 people including Joseph Stalin, the secretary of the Ceylon Teacher’s Union, and Duminda Nagamuwa and group of six from Frontline Party who was forcibly detained after being arrested by the police and released on bail while participating in protests,  were released (16) evening  before the end of quarantine period.

The arrest of Duminda Nagamuwa and others on the 7th after being granted bail by the court was met with strong protests throughout the country. However they were directed to the Pallekele quarantine centre. The following day, on the 8th, the day Basil Rajapaksa arrived in parliament to be sworn in, there was a massive protest in the parliamentary circle against the Kotelawala bill. The police arrested 31 persons, including Joseph Stalin the president of the Ceylon Teacher’s Union, who participated in the protest, but a group of people, including lawyers, strongly opposed their re-arrest. Attorneys at Law Shiral Laktilake and Gunaratne Wanninayake strongly stated that human rights cases would be filed against all police officers who were acting illegally. The detainees were tortured without even being provided with food or clothing and taken away without even revealing the location of the forced detention.

How the Human Rights Commission of Sri Lanka has fallen to a level of a Dog..

However the group was taken to the Mullaitivu Air Force Bsae at night.  They did not even consider the provisions of the quarantine act. Officials of the Sri Lanka Human Rights Commission who visited the detainees could not meet them. The Human Rights Commission of Sri Lanka (HRCSL) has called for a report from the Commander of  Air Force, Air Marshal Sudharshana Pathirana on the non- cooperation of the Commanding officer of the SLAF Base Mullaitivu,

According to a complaint received by the Human Rights Commission of Sri Lanka (HRCSL) its Jaffna Coordinating officer, T Kanagaraj and his team visited the Mullaitivu Air Force Base but Air Force officers has not given information regarding the case . were not informed by the Air Force Base. However main office of ( HRCSL) informed commander of Air Force and gone on the second day as well for a preliminary investigation. The letter sent by the Human Rights Commission to the Commander of the Air Force stated this situation.

During the second visit, the Commanding officer of the Air Force Base met the group at the entrance, but was not allowed to inspect the quarantine center, the Commission said.

There is no barriers near the Presidential Secretariat..

A number of human rights petitions were filed in court on illegal detention.

Protesters were protesting  for the first time from military bases. Stalin and his entourage were detained without a detention order. Massive protests were organized at the Lipton Roundabout in Colombo day after day for three days  and Friday was the last day. These campaigns were largely attended by trade unions, civil society organizations and political activists.  Initially  people were arrested for allegedly carrying out protests, but the government did not take actions to arrest those who took part in the protests and the government took a step back. However the government did not even try to stop the protest which marched to the Presidential Secretariat on Friday. ( pictures given)

The detainees were held for six days after their PCR tests were negative. However, the group was abruptly released on the evening of July 16. Preparations are underway to file personal human rights cases against 18 public servants, including police officers, on charges including illegal abduction and detention. Complaints have also been made to the human rights commission, the European Union and Commonwealth.

Not a breakdown of the military dream but a slight reversal..

However the government had to withdraw its repression under the guise of quarantine. This is a victory of people’s unity. This is not a breakdown of Gotabhaya’s military dream, but a slight reversal. Releasing the group will not alleviate the crisis. This is because the people first protested against the Kotelawela Act which was militarizing the education. It should be firmly rolled up.

The National People’s Force (NPF) Saturday (17) staged a protest in front of the Fort Railway Station demanding the repeal of the bill.