What is the deal between kangaroo court and Attorney General who acquitted Basil-Thiru in 'Malwana Palace' case? 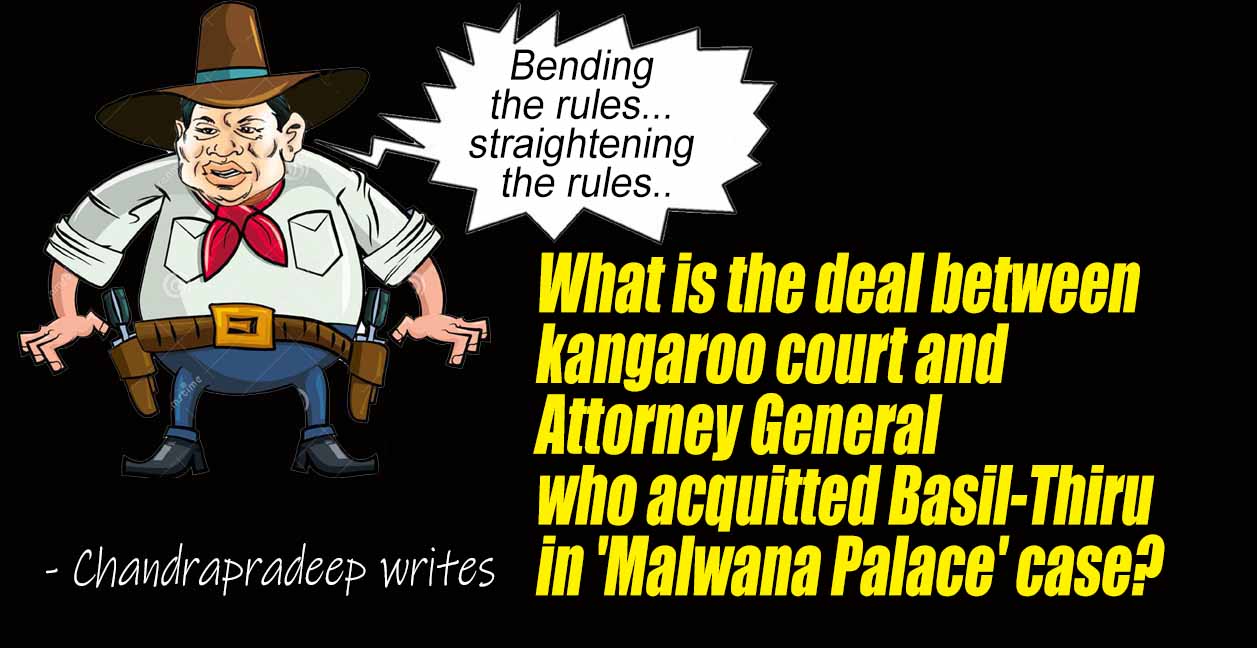 (Lanka-e-News -05.June.2022, 6.25PM) The modern house called “Basil's Malwana Palace” and 16 acres coconut land situated at No. 111/3, Gangabada Road, Mahawatta, Malwana was valued at Rs. 1900 lakhs in 2016. In relation to this, Basil Rajapaksha, and Nirupama Rajapaksa's husband Thirukumar Nadesan, who was exposed in the Pandora Papers, were charged with misappropriation of government funds and money laundering during the Good Governance Government.

The case was filed in the Gampaha High Court.

Both Basil and Thirukumar were acquitted 3rd June in the Malwana case, confirming that the lawsuits filed against the Rajapaksas under the Gotabaya-Mahinda government as well as the current Gotabaya-Judas Wickremasinghe government would be thrown out due to legal impropriety. That was by a decision given by High Court Judge Nimal Ranaweera.

When Thusith Mudalige questioned what did the witnesses say then?

When the case was taken up on 25 March 2022, the first witness in the case, contractor Upul Kumara Ramawickrema, testified that he did not make a statement to the Police Financial Crimes Investigation Division; and said he could not say for sure whether the signature on the statement was his own or someone else's. However, Ramawickrama and his architect Muditha Upali Jayakody, who awarded the contract to the former, had given different statements to the Pugoda Magistrate during the preliminary investigations.

As the case unfolded in the Gampaha High Court on 14 February 2019, Deputy Solicitor General Thusith Mudalige's questions were answered by contractor Upul Kumara Ramawickrama, and architect Muditha Upali Jayakody. What they said on that day is really different from what said today. The same High Court Judge Nimal Ranaweera was on the bench on both days.

When Thusith Mudalige questioned about how the construction work was funded, the witness Muditha Upali Jayakody said that various people had brought money and given to him at his office. "I did not know any of them personally. However, Mr. Basil calls me before he sends someone with money."

This land was under the name of Thiru Nadesan. Later it was transferred in the name of architect Muditha Upali Jayakody on behalf of Basil. The architect told the truth, answering Thusith Mudalige's questions in that regard in 2019. The witness said that he was in touch with the second accused, Thirukumar Nadesan, only at the time of purchase of the land and had no connection with the construction of the palace.

When Shanil Kularatna questioned, 'I don't know, I am a baby'...

The architect who testified as above in 2019 tells a different story to the court on 14 October 2021, after the Gotabaya government came to power.

"I have given evidence in this case before. I admit that I gave a statement before the Magistrate of Pugoda in 2016. On 22 May 2015, a team of officers from the Financial Crimes Investigation Division raided my office and took away the files that were there. At the time they come, I was not there; I was busy with other work; when I got there, they locked me in a room; they searched the cupboard drawers and looked for files; I was not in a good mood; they took my signature on a lot of documents, the signatures on the documents tagged as case items may or may not be mine. I'm not very clever in recognizing signatures.” The architect told the High Court that the statements he had given to the FCID was untrue.

Deputy Solicitor General Thusith Mudalige, who led the prosecution, was a brilliant official in the Attorney General Department. After Gotabaya came to power,  a commission headed by a lunatic called "Crazy Cat" was formed to investigate political revenge during the previous good governance. Thushith Mudalige was 'convicted' and later contracted a mysterious disease that caused brain dysfunction and died at a young age without proper consciousness. His death is as mysterious as the deaths of Supreme Court judge Prasanna Jayawardena, Killy Maharaja, Mangala Samaraweera and singer Sunil Perera who died mysteriously after Gotabaya came to power.

The witnesses who testified in this case now testify differently than what they said  earlier; but there are some other powerful witnesses. The Deputy Solicitor General Shanil Kularathna, who is currently prosecuting the case on behalf of Attorney General, told the court that he would not call further witnesses and continue testifying in the case.

Accordingly, Gampaha High Court Judge Nimal Ranaweera,  decided to not proceed with the case and acquitted the accused Basil and Thirukumar Nadesan from all the charges on 3rd June.

'Kangaroo courts', not temples of the Goddess of Justice…

If there is a judge who accept the change of testimonies by witnesses when governments change, then he is a judge of a  temple of the goddess of lawlessness.  When witnesses change evidence from time to time, there are many legal provisions to tackle such a situation. Ignoring those facts is inexcusable crime done by a person called 'judge'.

Thusith Mudalige, who prosecuted the case, had skillfully filed not only personal evidence but also circumstantial forensic evidence relevant to the case. He had gone to some foreign countries and collected evidence. Regardless of that, it is a heinous crime to throw away the case of Basil's Malwana Palace on the false testimony of two witnesses, without hearing the testimony of the other witnesses, while the general public were watching curiously.

In that case, the people should not be blamed…

In this case, Saliya Peiris of the Bar Association appeared for Thiru Nadesan, who has been revealed by the Pandora Papers as a corrupter; Thilak Marapana, a close friend of Ranil Wickremesinghe, appeared for Basil Rajapaksha, while the Department of Attorney General is under Wijedasa Rajapaksha, who is a notorious as well as crooked character nicknamed ‘Dealdasa’.

People need to be convinced that justice will be done to them by fair judgements, not by tricky ones. That is a basic principle. Otherwise, people will not be at fault if one day not only the houses of Justice Nimal Ranaweera, Deputy Solicitor Shanil Kularatna, and Attorney General Sanjay Rajaratnam but also their lives are destroyed as if the people had set fire to the houses of politicians on 9/5.

Collection of articles by the writer
https://www.lankaenews.com/category/54