Why is Sri Lanka below the breadline...? Another true reason nobody talks about...! 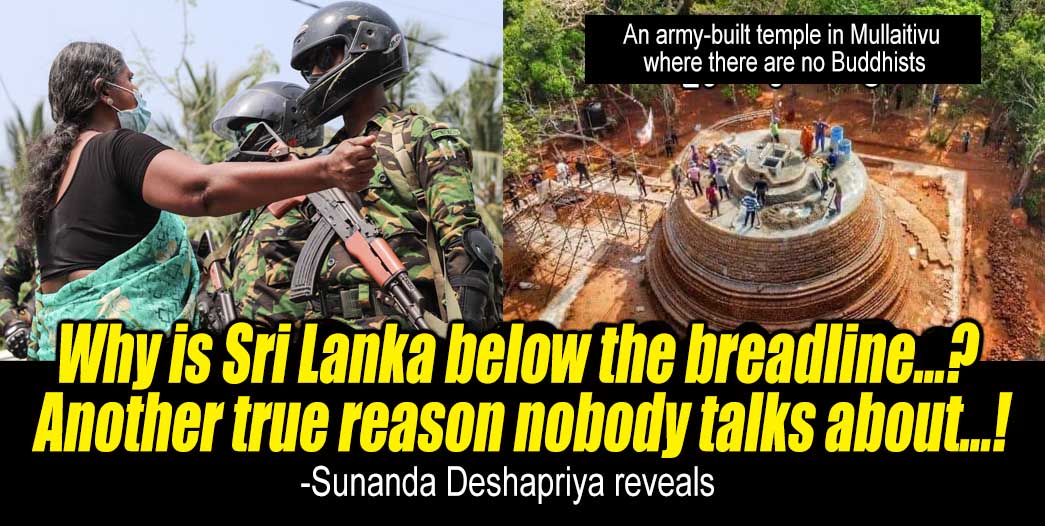 (Lanka-e-News -30.June.2022, 11.30PM) The people of the South were able to see a shadow of militarization when Gotabaya Rajapaksa imposed emergency rule and curfew, and called the army to Colombo to face the "GotaGoHome" youth protests.

Gotabaya Rajapaksa used militarization as one of the tools to govern the country. He even handed over control of the Covid plague to the Army Commander; such a thing did not happen in any country in the world. Covid control was completely militarized.

Gotabaya took steps to recruit 100,000 under the Army and build an additional informal force.

All of them, altogether with all those programs were failed in the manner the "Sir" was failed. Even Shavendra has now fallen on his sword.

Even today, more than a decade after the end of the war, there is severe militarization in the North East, especially in the North region. There is not a day that army and armored vehicles do not travel on the roads of Jaffna.

Army expenditure is double that of education and health...

Defense expenditure for 2022 is Rupees 373 billion. This is an increase of 14% over 2021. It accounts for more than 10% of total government spending. It's almost twice as much as spending on education and health.

The world's average war expenditure is 6.5% of government spending.

Even thirteen years after the end of the war, Sri Lanka has not reduced its military spending or military power.

In the year 2022, Sri Lanka Army was ranked 79th out of 142 countries surveyed. (www.globalfirepower.com)

Cost of secret account is more than the cost of entire judiciary...

It is said that the secret budget of the Ministry of Defense is higher than the budget of the Ministry of Justice. Expenditure incurred under this Expenditure Head does not come under an audit, and is said to be paid for intelligence obtained from civilians and members of the Civil Intelligence Service. It is said that it was not possible to trace the payments made to Saharan's team because those payments were made from this account. It is possible that this money is also being used for 'Buddhismization' in some parts of the North.

It is said that this fund could be used by the Chiefs of the Armed Forces and the Secretary of Defense, but there are no specific details. (An Army Commander had once told this correspondent that his Director of Intelligence would not give him any details other than the total expense figure of the year.)

This secret budget is a result of colonialism. But now many of Britain's colonies have brought these types of secret budgets under audit. This Expenditure Head is now subject to audit in India as well as in Britain.

Issue is not just the size…

Militarization is not just how many troops are stationed in an area quantitatively. The extent to which the civil administration is influenced by the military is also a decisive factor.

There are many cases where former army chiefs were appointed as governors in the Northern Province.

The effects of this widespread militarization have permeated all sectors of society. Tamils fear for safety of themselves and their children when constantly encountering army personnel on roads, markets and schools.

Militarization is visible openly as well as underground. Army collects phone numbers of former LTTE members, constantly asking them for details. Also, such personnel have been recruited to work in army farms. Another group is connected with the army's intelligence divisions. The Army Intelligence investigates any protests in the North East and videos the incidents publicly.

Amazing temples with a single one monk...

Militarization in the North East is related to forced 'Buddhismization'. The Presidential Task Force appointed to search for antiquities in the Eastern Province was primarily composed of Buddhist monks and military officers.

Buddhist antiquities in the North region belong to the Tamil Buddhist culture. But all of that is now being built with the protection of the military as an aggressive religion. Temples with a single monk and an army camp are still being established in the North region.

Almost every army camp in the north has a Bo tree and a temple. Once a Bo tree grows, it becomes eternal. Tamil Buddhists are rare today. However, the Sinhala Buddhist Army has established large and permanent camps and is living in those areas.

The army is openly terrorizing the civil society in the North. Intimidation, constant surveillance and restriction on civil society organizations in the North and East is another aspect of militarization. There were reports that three-wheelers belonged to or maintained by military intelligence are parked in front of such organizations.

In the regions in the South, the tri-forces does not organize school festivals, sports, etc. They do not go to schools and give lectures. Books are not distributed to poor school children. Subsidies are not distributed to poor families. The military does not organize Vesak festivals. Such actions are belonged to the civil administration. But the army in the North is doing all those things!

A number of tourist hotels in the North East are also belonged to the armed forces. They have large farms, too.

Another aspect of militarization is the seizure of Tamil lands by security forces. Even more recently, there have been several reported attempts to grab more land.

All of these are activities that should be subject to civil administration.

But in the North, tri-forces intervene in such civil affairs. It is clearly a militarization of civilian rule. Military interference in civilian administration is a regular occurrence in the North and it is now firmly entrenched.

One army soldier for every two civilians...

One of the worst areas affected by this militarization is Mullaitivu where the last battles of the war took place. About 60,000 army personnel are deployed there. It is 25% of the country's total military power. Mullaitivu has a population of just over 130,000. It is 0.6% of the country's population. These statistics show that there is an Army soldier for every resident. This is in addition to the air and naval forces stationed there.

It is also reported that 30,000 acres in Mullaitivu are under the army control. Most of the LTTE-owned and other state lands have been handed over to the military control.

Militarization tramples the basic rights of the Tamil people in this country and has created an environment of fear. Many reports indicate that it is very difficult to ascertain the true state of militarization.

Silence of the disgusting media...

Militarization is a massive violation of human rights. Another tragedy is that this terrible silence militarization conspiracy has been able to suppress the Sinhala media in the country.

This is a country where people lined up to pay homage to a "baby snake" thrown into a five-liter skewed plastic bottle, tens of thousands wrestled to drink “Dhammika honey”, and thousands who were deceived by the Rajapaksa propaganda and sent to watch matches wearing 'yellow.' Therefore, it not too hard for the disgusting media to cover up the actual militarization in the North.

Reducing war expenditure is one bold step that Sri Lanka needs to take to overcome the crisis it faces today, but no political party is talking about it because all of them are moving in the same direction of popular politics.