Another exposure by the Jailor Podda 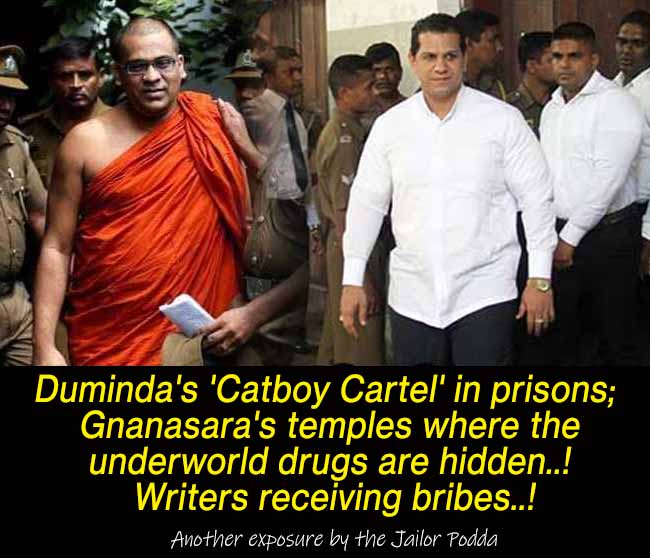 (Lanka-e-News -17.Feb.2020, 11.30PM) Prison drug mafia and the media mafia in Sri Lanka have been stirred by the recent revelation of jailor Podda's news in Lanka e news about President Nandasena who did not meet Drug Kingpin Duminda and Dematagoda Chaminda who operates the ‘Catboy Cartel’ in prison

In order to take the helm of the drug mafia in Sri Lanka, the hands of the mafia's headquarters, Colombo Prison, must be seized. Colombo Prison is Sri Lanka's largest drug free market. In addition to narcotics, cocaine and ice (crystal meth) drugs, 500g to 800g of heroin is sold daily in the Colombo Prison alone. The drug mafia earns millions of rupees a day. One may question how the prisoners get so much money to buy drugs. There is no money necessary in prison to buy drugs. This drug racket is done in the form of post payment and Easy Cash. The money is paid by the relatives of the prisoners.

Journalists who dependent on drug underworld..

Either way, the amount of money that circulates in Colombo prisons every day is in millions. Apart from corrupt prison officials and drug dealers, there are others who benefit from this racket. That is, the so called national newspapers that frequently write stories about drugs and underworld are the ones who write about them. The job of these writers is to protect the underworlds which feeds them and accuse about the allies of their friendly underworlds gangs. An amount similar to the amount paid to the corrupt jailors and police officers are paid to these writers.

In addition to the Duminda faction, the Muslim and Tamil underworld gangs with Angoda Lokka, Makandure Madush, Kanjipani Imran are in and out of the prison. Although the Sri Lankan media has tried to divide the underworld into Sinhala, Tamil and Muslim aliens, but more or less all of them are in this underworld. As in politics, in underworld too there are no permanent friends or eternal enemies. Despite conflicts time to time drugs have been the mainstay of the underworld in Sri Lanka for many years by the Dawood Ibrahim faction operating from Pakistan. Wele Suda, who is currently in prison who has a direct link with Duminda Silva's party, is still a strong representative of the Dawood Ibrahim group. Heroin bearing Vele Suda's 'FISH' mark is still one of the most soughted heroinin Sri Lanka.

Journalists of mawbima and Aruna who hide Dumanda’s Catboy cartel..

With the change of government, Duminda Silva's "Catboy Cartel" has unleashed a political power and has now started a campaign for a drug monopoly. The conflict in progress by these writers is a part of the same battle. Kosgoda Tharaka is getting more attention at the prison these days. Kosgoda Tharaka represents Duminda Silva's "Catboy Cartel" faction. Kosgoda Tharaka is the main strongmen in the prison working for Duminda. Due to the harassment and assault to the prisoners, the Prison Authorities has planned to transfer him to Boossa Prison but due to the political and wealth influence of Duminda the transfer is halted. In an article published by Prasad Abeywickrema in the Mawbima newspaper recently, Kosgoda Tharaka’s transfer to the Boossa has been justified on the instructions of Chaminda (read https://mawbima.lk/news-more/50742)

In all the recent media reports published in these newspapers about Dematagoda Chaminda and his brother Dematagoda Ruwan who is selling the drugs of Duminda Silva has been deliberately concealed.

According to information obtained from Dematagoda Chaminda, the two men who fabricate stories about the underworld and the drug mafia in his favor are looked after well. Few moths before an underworld group together with a team of police and media reporters of the Pohottuwa conspired an assisination plot about the former president Maithripala Sirisena and the current president Gotabaya Rajapaksa. The story is now being used by these sordid writers to oppress the allied group who are against the "Catboy Cartel".

The purpose of all these efforts is to take control of the Colombo prison and the monopoly of the drug business in Sri Lanka by the Duminda Silva-led "Catboy Cartel".

Recently a businessman who spent time with a "catboy cartel" in the prison is about to launch a vocational training course for prison inmates with his money. Although it looks excellent work at first glance the authorities need to pay attention to this project as the businessmen will not pocket out free. Meantime Gnanasara the Buddhist monk of the Bodu Bala Sena has also recently agreed to work in cooperation with the "Catboy Cartel".

The Safe House, which hides the drug cartons of the "Catboy Cartel", has now become one of the few Buddhist temples in the suburbs of Colombo that have links with the monk. In these temples super apartment houses are being built these days. Gnanasara who is travelling these days in Europe is stating that Mahinda Rajapaksa should be arrested if the latter don’t allow Gotabaya to work on his own.

Editors who are in in the media mafia in Sri Lanka, says of their partisan reporting that they are balancing power among underworld groups. Balance is done to maintain something. But what is to be done is to expose and destroy all the underworld activities. Ironically, there is no room for corrupt officials, politicians and from corrupt journalists too.