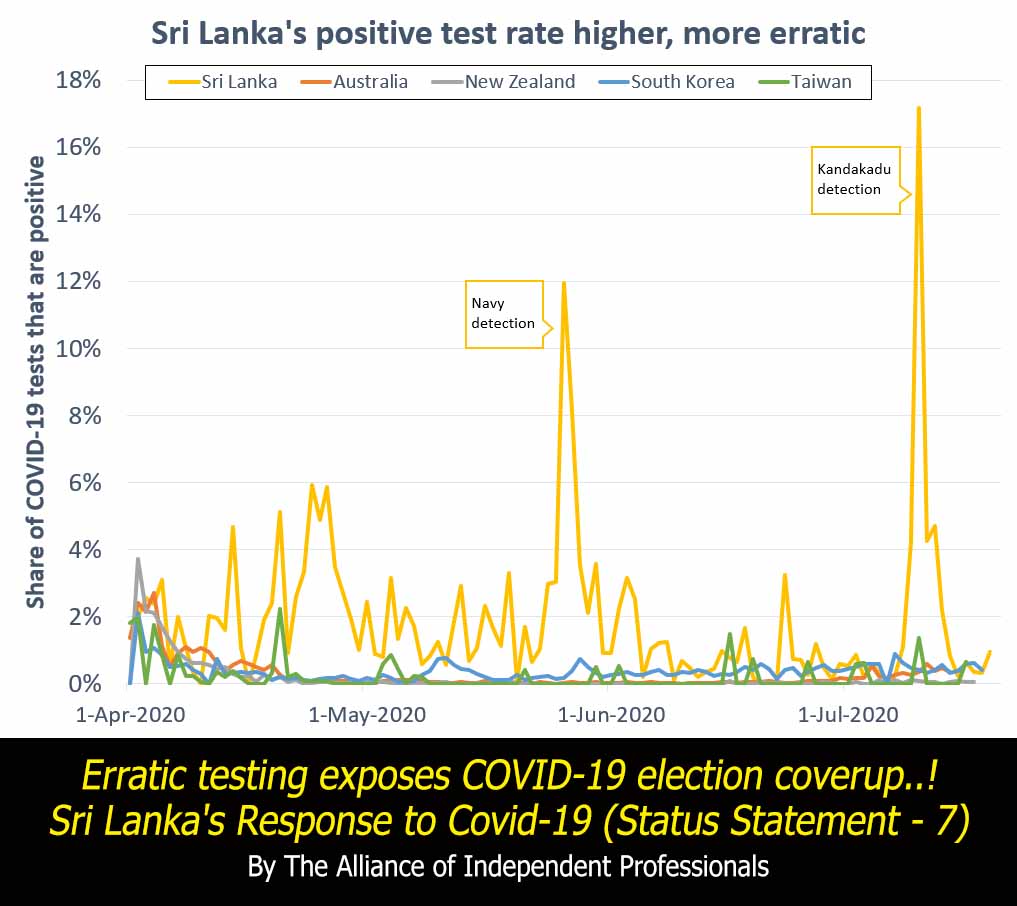 The Kandakadu Cluster and Abductive Quarantine

Between 10th July and 17th July, over 1,250 positive test results were recorded, of which just over 800 are associated with the new Kandakadu cluster. Public Health Inspectors (PHIs) had been trying to alert the national task force and health ministry about the large number of inmates showing respiratory symptoms at Kandakadu for days, but were only taken seriously when 40 samples tested at Sri Jayawardenapura came back positive in a single day.

As of Tuesday (21) morning, 92 patients being treated in a makeshift military hospital near Kandakadu were in serious condition, suffering from severe respiratory illness and high fever. Medical officials have sought their urgent transfer to Colombo or another hospital with the appropriate facilities to care for them, but the army commander has denied permission to move the patients on the basis that they are prisoners who cannot be moved without a court order.

New patients from the cluster have since been identified from Anuradhapura, Polonnaruwa, Gampaha, Ratnapura, Colombo and Kalutara. Over 3,500 people selected by the military have been placed into makeshift quarantine centres staffed by soldiers instead of qualified medical personnel. PHIs across the country told AIP that there is strong evidence of widespread COVID-19 infection across the community despite government denials and attempts to hide the spread of the virus until the general election.

Health officials and even some task force members have warned the government to close down all schools, universities, factories and other crowded areas in the eight districts where they suspect the disease is spreading, but the government agreed only to close universities. The President and Defence Ministry has said that more widespread closures will only be permitted in the Northern and Eastern provinces.

Uniformed military officers in army vehicles have thereafter forcibly abducted over 80 ‘suspected’ COVID-19 patients and their families from impoverished areas in Kekirawa, Shawastipura, Ambalantota and Neluwa, without informing PHIs or local government agents (‘grama sevakas’). PHIs were later informed that these people have been taken to quarantine camps. The method of forcible removal is similar to that used by the military on suspected Muslim COVID-19 patients in the Kalutara and Kandy districts earlier in the year.

The Sri Jayawardenapura testing lab has come under fire for releasing positive test results to the requesting physicians without authorization from the task force, which is how news of the Kandakadu cluster first became public. The lab has stopped testing samples after its results were contradicted by the government, which called several hundred of their tests “false positives.”

In fact, it is almost impossible for COVID-19 PCR tests to deliver false positive results. False negatives are much more common. Guidance from School of Medicine at the Massachusetts Institute of Technology (MIT) published on 13th May 2020 describes the test procedure as follows:

The same MIT guidance warns that false negative results occur “relatively often”, meaning that many people who test negative for the virus may actually be infected. This is exactly what researchers at Sri Jayawardenapura University had also tried to warn the government about, based on their careful study of test kids widely used in Sri Lanka. They were ignored. The research was ultimately submitted to the Journal of the Ceylon College of Physicians, showing that several test kits had a false negative rate of over 30%. The university has now refused to test further samples due to government pressure, to protect the reputation of the university and its faculty from government attack.

Since the Sri Jayawardenapura incident, other labs around the country have locked down the dissemination of test results, communicating all results only through military officers designated by the task force or by the health ministry secretary, who too is an army general. According to officials with access to data held by the task force, at least 3,100 positive patients have been identified as of 10:00 am today. Where the government is unable to demonstrate a direct link between a patient and a known cluster, the results have been suppressed.

Sri Lanka is one of few countries in which people are not regularly and repeatedly encouraged to come forward and seek COVID-19 testing if they are experiencing respiratory symptoms. This is a deliberate policy choice by the President and his task force, overruling health officials, to minimize the known spread of the virus. Many doctors have also warned their patients against seeking testing, for fear that both doctor and patient and their families may be forced into quarantine. Instead doctors routinely encourage patients to self-quarantine if they feel sick unless they require emergency care.

The self-censorship is most evident in a dramatic decline in the detection of influenza-like illness (ILI) and severe acute respiratory infection (SARI) by the influenza surveillance program of the Health Ministry’s Epidemiology Unit. There are typically several thousand patients per month with such symptoms but since March 2020 the Epidemiology Unit has reported under 200 cases a month of these kinds of illnesses. Public health experts assess that these low numbers can only be the result of dramatic underreporting.

The government rarely issues a test result on samples collected from people who they believe may test positive for COVID-19, with exceptions being tests conducted on people traced to quarantine centres, prisons or rehabilitation camps. The government has identified just under 3,000 persons in the cabinet, military, police, public service and Sri Lanka Podujana Peramuna who may come into contact with the President or his close associates. These people, predominantly military personnel, are tested on rotation every three days, at a rate of just under 1,000 per day.

Compared to other countries who claim to have largely contained the virus, Sri Lanka tests far fewer members of its population. The country's rate of tests that are positive is significantly higher and more erratic than the rates seen in Australia, New Zealand, South Korea or Taiwan. Sri Lanka’s positive rate averages around 1.9%, while the rates of these countries are six times lower, at approximately 0.3%.

Given the high and erratic rate of positive test results in Sri Lanka, and the published evidence of a high false negative rate, both local and international health experts believe that if Sri Lanka drastically scaled up testing and bolstered public confidence in coming forward to get tested, several thousand more cases could be detected and tens of thousands could be prevented. The disease will not be under control in Sri Lanka or any other country until a low portion of test results, approximately 0.2%, come back positive, for at least a month period. These criteria and observations are shared by public health experts in the United Kingdom and European Union, which have declined to allow travel from Sri Lanka during their phased reopening.

After several months of raising objections to their being left out of the decision making process, and of the military interfering with and taking credit for their work, the PHI union has begun a strike, and withdrawn from COVID-19 detection and prevention work. These health inspectors have been working seven days a week since the crisis began. They are on the frontline of contact tracing efforts and identifying potential patients and new clusters. In many cases they have been separated from their families for months due to the need to self-isolate in their dangerous work. Several still sleep on desks in their offices.

Despite their heavy burden, the government has refused to pay their entitled emoluments such as overtime and regular allowances, claiming that it is short of funds. After several months of empty promises, the PHIs begun to strike, resulting in a 60% drop in the identification of new samples for COVID-19 testing. The government has not been affected by the strike, as it considers a decline in case detections to be a boon to them until the elections are concluded.

Article 14 (1) (i) of the Constitution guarantees that every Sri Lankan citizen has an unrestricted fundamental right to return to Sri Lanka. While Article 15 permits certain restrictions on several other fundamental rights such as freedom of speech or assembly, the freedom to return to Sri Lanka is an unrestricted right that cannot be abridged by the government under any circumstances. However, as of this week, at least 82 Sri Lankan citizens stranded in the Middle East have died. Most of the dead had lobbied vociferously for the government to arrange their repatriation. The government had however taken a policy decision against returning these mostly lower-middle income citizens to Sri Lanka. Over 1,100 Sri Lankans remain stuck in the Middle East. Neither the Foreign Ministry nor the Foreign Employment Bureau are responsive to their queries on when or whether they will be allowed to return.

The Health Ministry delayed the publication of social distancing rules for the elections until the majority of government campaigning was complete. The guidelines were only issued on 17th July when the Election Commission warned the Health Ministry and the President that they may be compelled to postpone the election once again unless the guidelines were issued. The rules themselves are tailored to prioritise campaigning and pleasing politicians over containing the virus. For example, Regulation 3 states that the number of persons attending an election meeting shall not exceed three hundred. The rule then makes an exclusion: “provided, however, where the leader of a political party or an independent group participates at such meeting, the number of persons attending such meeting shall not exceed five hundred.”

The Sri Lanka Podujana Alliance (SLPA) and Samagi Jana Balawegaya (SJB) alliances are both composed of multiple smaller political parties such as the Mahajana Ekshath Peramuna (MEP) and Sri Lanka Freedom Party (SLFP) in the SLPA, the Sri Lanka Muslim Congress (SLMC) and Upcountry People’s Front (UPF) in the SJB. Effectively most election meetings can now bypass the 300-person limit.

The Attorney General has already indicted SJB candidate Champika Ranawaka. The President has also instructed that charges be filed against UNP candidate Ravi Karunanayake, All Ceylon Makkal Congress (ACMC) leader Rishard Bathiudeen, SJB candidate Rajitha Senaratne, Swiss Embassy employee Garnier Francis and attorney Hejaaz Hisbullah, all prior to the election. The Attorney General has responded that it will not be possible to charge Hisbullah before the election, but that the others can be indicted on time.

The President is extremely confident of securing at least a simple majority, and possibly even a two-thirds majority in the forthcoming elections. The Ministry of Defence has prepared a radical plan to lock down and contain COVID-19 after the new Parliament sits, including an effort to increase testing to over 25,000 samples a day and to ramp up the forced quarantine program.

The President has also decided to appoint a major general to the post of Inspector General of Police, after the Constitutional Council is replaced under the new Parliament. The two shortlisted candidates are incumbent Chief of National Intelligence, General Jagath Alwis, and General W.A. Wanniarachchi, a former Director of Military Intelligence who has been implicated in the disappearance of journalist Prageeth Eknaligoda and the murder of journalist Lasantha Wickrematunge.

(The Alliance of Independent Professionals consists of 28 Sri Lankan professionals and academics in both the public and private sector. The authors and members of the organisation remains anonymous due to the serious risk of reprisals by the government and military)